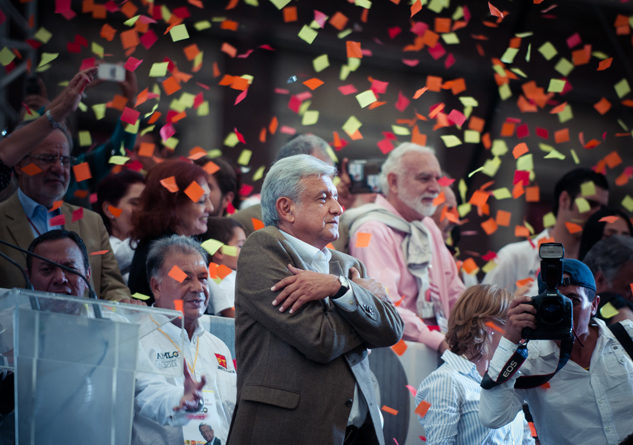 Mexico City – Mexico’s president-elect, Andres Manuel Lopez Obrador, said Tuesday that the transition to his government will be orderly and peaceful without anything to be afraid of, after meeting with current President Enrique Peña Nieto at the National Palace.

“Throughout this period we must come to an agreement on many issues. Above all to make the transition orderly and peaceful, with nothing to be afraid of, while giving people confidence in our economic plans,” said the leader of the leftist National Regeneration Movement (Morena) and winner of the July 1 presidential election.

Lopez Obrador said that until Mexico’s Electoral Tribunal officially names him president-elect, he won’t start the transition of powers, which will go on until his inauguration on Dec. 1.

Mexico’s future president also said he’ll give up certain luxuries of the office like a security guard, the Los Pinos residence and the presidential airplane, as he promised during the campaign.

In addition, he said he will convert the official residence of Los Pinos into a “space for the arts and culture of the Mexican people” and that he won’t live there.

“I’ve always believed that the people will look out for me, and that the person who fights for justice has nothing to fear,” he said.

The winner of the election thanked Peña Nieto for “acting in a respectful manner” during the electoral process and said that “in general the elections were clean and free.”

Lopez Obrador noted that in past elections – he ran for president unsuccessfully in 2006 and 2012 – he was hurt by “factional interventions,” unlike on this occasion, where “citizens’ votes were respected.”

Matters he discussed with Peña Nieto included the North American Free Trade Agreement (NAFTA), the construction of Mexico City’s new airport, and energy reform, which has liberalized the hydrocarbon industries.

The meeting began punctually at 11:00 am at the National Palace, after the Morena leader made a flamboyant appearance surrounded by the media and his followers.

More than 89 million Mexicans went to the polls this July 1, making these elections the most voluminous in the nation’s history.

Besides choosing the new president, voters elected 128 senators, 500 lawmakers, eight governors and the head of the Mexico City government, along with thousands of local officials.

Is ridesharing via companies like Uber and Lyft good or bad for the environment overall?