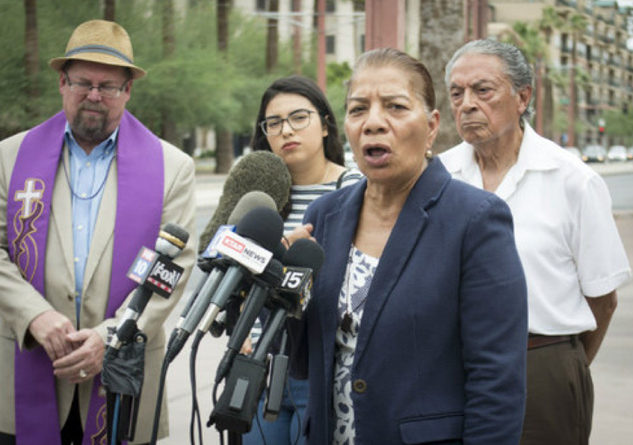 Petra Falcon gathered with community members and religious leaders Friday in front of the Immigration and Customs Enforcement Office in Phoenix to speak out against the separation of migrant children from their families. Photo Credit: Katherine Davis-Young/PNS
by ElObservador 06/22/2018

PHOENIX — Immigration rights advocates in Arizona and around the country are continuing to speak out against the Department of Homeland Security’s policy of separating migrant children from their parents.

About 2,000 children were separated from their families at the U.S./Mexico border this spring, according to the Associated Press. The separations come as the result of a stricter Homeland Security policy to prosecute all adults who cross the border unlawfully. Since kids aren’t charged with crimes, the department doesn’t detain them with their parents.

Petra Falcon is the director of the immigrant-rights organization Promise Arizona.

“We as a nation need to pay attention to this and we need some answers and some action as to what this crisis is making these children live through,” Falcon said.

Her organization has joined with Arizona religious leaders to condemn the family separations. Politicians from both parties, including Arizona Republican Sen. Jeff Flake, have expressed concerns over the practice of removing children from their parents.

Attorney General Jeff Sessions announced the “zero-tolerance” policy in April, saying if people don’t want to be separated from their children, they shouldn’t cross the border illegally.

But Falcon said people fleeing violence and poverty already have weighed the risks of coming to the United States, and taking their children away is inhumane.

“We’re a society of people,” she said. “We like to think that our values are based on humanity and democracy.”

Over the weekend, Promise Arizona held a Father’s Day vigil to call attention to the parents and children who couldn’t spend the holiday together.

What can I do to help bees back from massive die-offs in recent years?