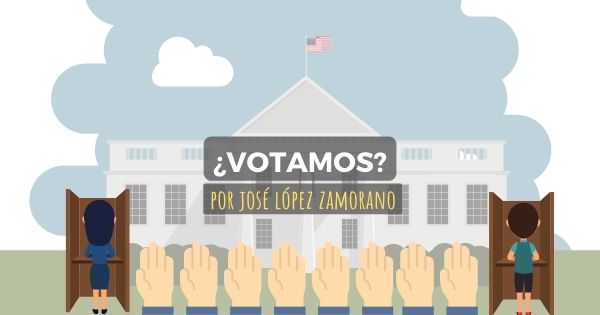 With the November 3 elections just around the corner, the question that is repeated cyclically every four years about Hispanic electoral participation arises: Will we be decisive in the states where it really matters, or will we be irrelevant?

With 32 million Hispanics and Hispanics eligible to vote in the elections, equivalent to more than 13% of all eligible people, Spanish speakers will be the most important racial or ethnic group during an electoral process in the United States.

As a result of the progressive population growth, every four years more Latinos vote in the presidential elections, but unfortunately the proportion of those who vote, compared to the total of eligible Hispanic voters, has decreased in several electoral cycles.

In 2016, experts anticipated that Donald Trump’s anti-immigration rhetoric would detonate a record number of Latinos eager to defeat him. While it is true that Latino participation figures increased compared to 2012, in the end they did not make much difference in those states that defined the election.

In any event, Trump won 28% of Latino support, a figure that was even slightly higher than the Latino vote for Republican Mitt Romney four years earlier.

If an issue has the potential to become the hallmark of the 2020 electoral process, it is undoubtedly the COVID-19 pandemic and its aftermath of unemployment, at a time when half of the Latino community has reported layoffs or pay cuts

Eleven weeks before the elections, 70% of Latinos disapprove of the presidential handling of the health crisis, which represents an increase over the 56% that existed in May, according to a new poll by Latino Decisions / Unidos US.

As we get closer to the home stretch toward the election, Latinos seem to be more excited to vote. 69% of the Latinos interviewed said they were sure they would vote on November 3, an increase of seven percentage points over May.

If enthusiasm materializes, Latinos could be decisive in eight battleground states where the proportion of Hispanics eligible to vote in 2020 is greater than the margin of victory in 2016: Arizona, North Carolina, Colorado, Florida, Pennsylvania, Texas, Nevada, and New Mexico. In at least 4 of those states, Joe Biden leads Trump.

If we assume as correct the estimate that up to 18 million eligible Latinos have not yet registered, It makes sense that the desire of numerous organizations such as Poder Latinx, Mi LULAC, Mi Familia Vota, Voto Latino and others that this key group of eligible voters be registered, verified in registration and vote, preferably in advance and by mail.

Technology is helping. In the campaign of La Red Hispana you only need to send a text message with the word VOTAMOS to 52886 to start the registration or verification process for free. Never before has the opportunity existed to stop being spectators and become protagonists, literally at the reach of our fingertips.

Ramón Rodríguez se hace amigo de “The One and Only Ivan”