Groups Press VA to Include Farmworkers in Minimum-Wage Law 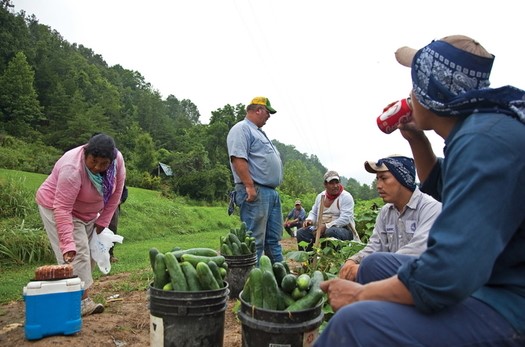 Gov. Ralph Northam has until April 11 to amend Virginia's minimum wage bill to include farmworkers. Photo Credit: Laura Elizabeth Poh/Bread for the World
by ElObservador 04/03/2020

RICHMOND, Va. — Farmworkers have been classified as “essential” during the COVID-19 pandemic, and groups in Virginia are now urging the governor to guarantee these vital workers receive a minimum wage.

Kim Bobo, executive director with the Virginia Interfaith Center for Public Policy, said agricultural workers are risking their lives to bring food to America’s tables, yet they’re exempt from Virginia’s new Minimum Wage Act. She said groups are asking Gov. Ralph Northam to amend the act to allow farmworkers to qualify for a living wage.

“We don’t want them to stay home, we want our food supply to continue. And in other fields people are getting hazard pay for doing this work,” Bobo said. “Well, we believe at the minimum, farmworkers deserve to have the minimum wage as part of their pay.”

Agriculture is Virginia’s largest private industry, and more than 10,000 immigrant farmworkers come to the state each year to harvest crops, according to the Legal Aid Justice Center. The governor has until midnight April 11 to make an amendment.

The Minimum Wage Act will raise the minimum wage to $15 an hour by 2025. Bobo pointed out that last year’s Legislature eliminated many minimum-wage exemptions that had been in place for jobs traditionally held by African-American workers, including shoe shiners, ushers and doormen. But lawmakers still didn’t exempt agricultural workers.

“Farmworkers historically were African-Americans. They’re now immigrants. And we’ve excluded them from being considered equal to other workers,” she said. “And that is clearly part of our racist history, is the exclusion of farmworkers from the minimum wage.”

In the United States, more than 30% of farmworker families live below the poverty line, according to the Department of Labor. More than 50% have no health insurance and limited access to health care, making them particularly vulnerable to the coronavirus.