U.S. Jails Crowded with People Not Convicted, but Awaiting Trial 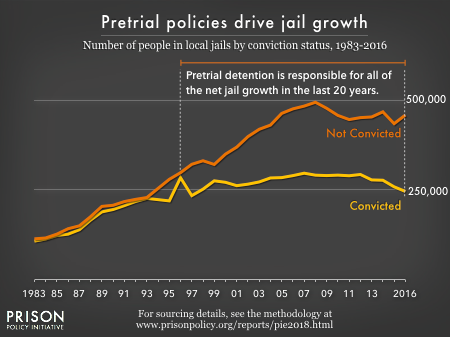 According to new research, people with mental illness or other problems often end up in jail awaiting trial because the community may lack other good options for them. Photo Credit: Prison Policy Initiative
by ElObservador 07/12/2019

CHARLESTON, W.Va. – Across America, the population in local and regional jails has tripled in the last 40 years.

And new research suggests that over the last 20 years that growth is essentially made up of people who haven’t been convicted of anything.

The Prison Policy Initiative examined U.S. Justice Department and past census data from the 1980s through 2016.

Wanda Bertram, a communications strategist at the Prison Policy Initiative, says the research and advocacy group found pre-trial detention is a major factor, as many detainees either can’t afford their bail or judges won’t release them on personal recognizance.

“The pre-trial population, which is much bigger than it was 10 or 20 years ago, is primarily what’s driving crowding in local jails,” she states. “These are people that have not yet been convicted of a crime, but are being held before their trial.”

Bertram says many people with addictions or mental illness end up in jails simply because the community lacks other good options.

She says that, and mass arrests tied to a tough on crime approach, have created an expensive problem for local governments.

Supporters of what’s known as broken windows policing, which focuses on small crimes, argue it serves as a deterrent and has driven crime rates down.

In part to deal with overcrowded jails, West Virginia has worked on reducing the root causes of incarceration, especially substance abuse.

Bertram says that’s a smarter approach. She says the kind of things that help keep people out of the criminal justice system – family support, a job, substance abuse or mental health treatment – are all interrupted when someone is locked up.

“Taking people that are already suffering from a lack of services and doubling down on their pain,” she points out. “For the most part, people that are released pre-trial do show up for court. And when they don’t show up, it’s because of the same reason that, you know, you might miss the bus, your boss kept you late, you couldn’t get time off work, you had a child care issue come up, you just forgot.”

Bertram adds some local jurisdictions have seen promising results by doing away with cash bail – instead, releasing folks ahead of their trial and following up with reminders and the like. She says most people would rather stay out of trouble.