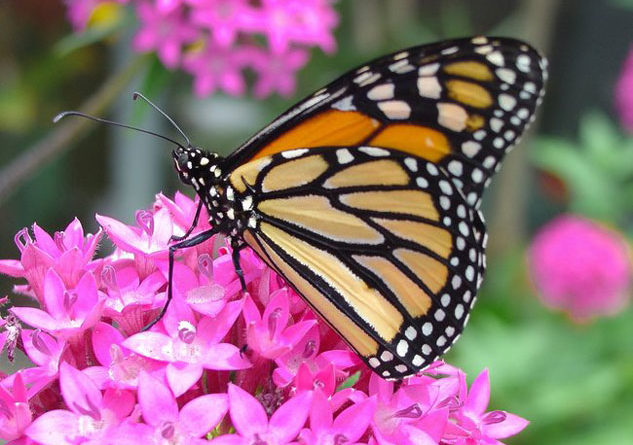 The monarch butterfly, which is under consideration for endangered status, depends on milkweed, a plant being lost to crop production linked to the Renewable Fuel Standard. Photo Credit: Pollinators/Pixabay
by ElObservador 03/15/2019

SACRAMENTO, Calif. – A new report on the nation’s Renewable Fuel Standard shows multiple ways the policy has had major unintended consequences for the environment. Researchers from University of California-Davis, Kansas State University and the University of Wisconsin found that promoting the biofuel ethanol drove up the prices of corn and soybeans – which led farmers to plant a lot more of those crops.

David DeGennaro, agriculture policy specialist with the National Wildlife Federation, says that led to the conversion of 1.6 million new acres into farmland between 2009 and 2016.

“By taking what was wildlife habitat and putting that into industrial crop production, you release a huge amount of carbon from the soil that has been stored there for decades,” says DeGennaro. “You destroy wildlife habitat, and the process of farming sends a lot of fertilizers and soil and other pollution downstream.”

The Environmental Protection Agency is about to revamp the RFS, as it’s known, and will issue a proposal this spring and a final rule by this fall. Supporters of the existing standard say the higher corn and soybean prices have increased incomes for farmers and that ethanol has reduced U.S. dependence on foreign oil.

Aaron Smith, professor of agricultural and resource economics at UC Davis, says he hopes this study will inform the debate over how to fix the RFS – and encourage policymakers to de-emphasize ethanol and promote alternative biofuels, such as those made from grasses, waste oil and waste wood.

“Debates within EPA surrounding the Renewable Fuel Standard have been mostly debates between Big Corn and Big Oil, and the environmental interests have been left out,” says Smith, “even though by law, EPA is required to account for the environmental cost when it is recommending changes to the policy.”

The report estimates that the plowing over of virgin land has sent as much carbon into the atmosphere as the annual output of seven coal-fired power plants. Researchers also found the policy has led to the destruction of thousands of acres of milkweed, which is the primary food source for monarch butterflies.

There’s a lot of talk about overfishing and pollution wreaking havoc in marine ecosystems, but is there less wildlife in the oceans these days?