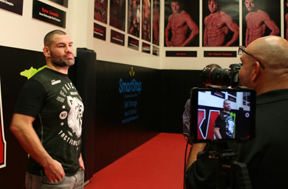 With only two weeks from UFC 196, the fight hype was in the air and MMA fans had something special to look forward to during Super Bowl weekend. The event scheduled two of the sport’s premier heavyweight fighters for an anticipated rematch.
One of the Bay Area’s MMA heroes, Cain Velasquez was seeking redemption against Fabricio Werdum, the man who took his belt during their last bout in Mexico City (Velasquez’s first time fighting in the country) in early 2015. Unfortunately, in the last week the event has undergone major changes due to unforeseen circumstances that have left the fans and UFC scrambling for answers and alternative fighters.
Many fans wanted to see how Cain would fight in a venue where elevation and training location would not be a factor. In their first fight, there was speculation that Cain fought at a disadvantage because he did not hold his training camp in Mexico City like Fabricio and was not able to adjust to the high altitude during the fight, leading to fatigue and a fighter who did not look like the usual Cain Velasquez. Fans looking forward to the fight were disappointed to hear that Cain pulled out just two weeks prior because of a back injury.
Cain thanked fans for all of the support he has received and had this to say on the injury, “sometimes no matter how much the heart and mind want to fight through an injury, healing has its own timeline. We thought we’d get through it, but we had to face the truth that it wasn’t going to be OK in time to fight. All of us fighters have all fought injured at one time or another, but I can’t ignore this injury, as my doctor has indicated that not addressing the problems with my sciatic nerve could have longer-term consequences. My fans deserve to see me compete as close to 100% as possible,” said Cain on his official Facebook account. Bay Area fans and Cain supporters are left to wonder when he will fight again and if the rematch with Fabricio is still in the future.
With the main event of UFC 196 down one fighter, they called upon Stipe Miocic to fill in on short notice and take on Fabricio. But if Cain pulling out wasn’t enough, just one day later Werdum also pulled out of UFC 196 citing back and foot injuries. With a chance to prove that the first victory was no fluke, Werdum said he was willing to fight through the injury if Cain were still his opponent.
He had this to say on his own pulling out, “I was already injured. I have a foot injury and haven’t been able to throw kicks in training for two weeks. I would still fight Cain because I was injured the last time, but I also hurt my back last Friday. I went to the doctor, tried to continue training, but couldn’t spar as I should spar. I decided not to fight because I’m not 100 percent. If Cain was the opponent, I would go on. It’s not his fault. It’s nobody’s fault. Injuries happen.” Ultimately, Werdum’s decision is a sensible one.
With a heavyweight title fight, the fighters earnings are directly related to the success of Pay Per View buys. Against a fighter in Miocic with a smaller fanbase and less overall fight hype, Werdum’s earnings were going to take a hit. Not only that, but at 38 years old, his opportunities at the top of the sport are few and far between. A loss to Miocic with injuries and little time to prepare could have effectively ended his run in making good money in this sport.
A loss to Velasquez would have been different because it could have set up a Werdum-Velasquez 3, something fans would be excited about and another chance to make good money. Although his decision was the right one, stating that he would still have fought if it were Cain caused a lot of backlash from fans. Werdum stood by his choice, calling it the best decision of his life.
Fans were left wondering what the UFC would do with both main event fighters pulling out. Jon Jones was willing to step in if it were for the actual belt, and Nate Diaz tried to save the event proposing his fight against Anthony Pettis.
Dana White would then come to announce that UFC 196 was being changed to UFC Fight Night 82 and that pay-per-view would be cancelled and the event would air on FOX Sports 1 with the headliners being Johny Hendricks vs. Stephen Thompson. UFC 197 is being renumbered to UFC 196 with McGregor trying to make history against Rafael dos Anjos in March.
Hopefully MMA fans will still get a chance to see Velasquez and Werdum in the Octagon sometime in the future, but for now the two men can rest and retrain to their healthiest capacities.