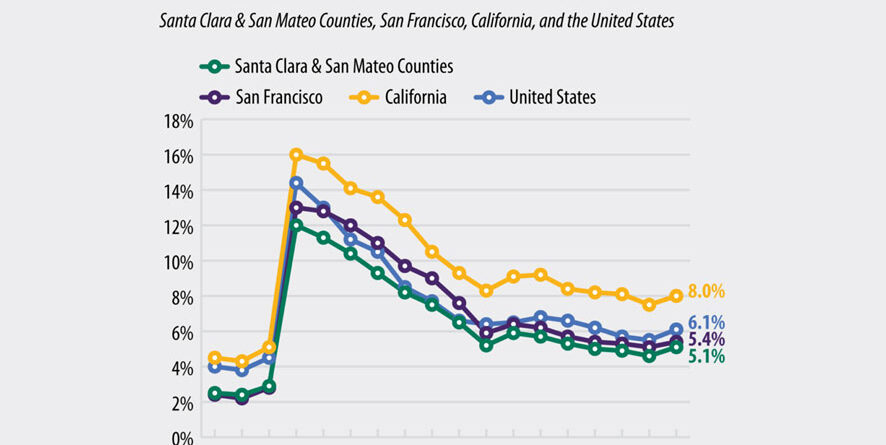 The unemployment rate in Silicon Valley saw a slight increase in June, signaling that the region still has a way to go before returning to pre-pandemic levels.

The regional unemployment rate increased from 4.6% to 5.1% between mid-May and mid-June, according to a study released this month by Joint Venture Silicon Valley, a nonprofit that analyzes the economy and quality of life in the South Bay. The analysis examined data from a July 16 report from the California Employment Development Department.

That increase is “significantly driven” by the job losses in Santa Clara County, according to Rachel Massaro, director of research at Joint Venture Silicon Valley. Between May and June, the county lost 1,400 jobs and gained 4,400 unemployed workers. Neighboring San Mateo and San Francisco counties gained more than 4,000 and 5,000 jobs, respectively.

“This is the first month since the pandemic that we’ve see this contrast,” Massaro told San José Spotlight, adding that state data is limited, so it’s not immediately clear what drove job losses in the county. “It’s difficult to pinpoint why, but hopefully we can see more clearly in the coming months.”

Silicon Valley, defined in the analysis as the combination of Santa Clara and San Mateo counties, is slowly recovering from the record job losses of 11.6% in April 2020 in the early days of the pandemic.

As of mid-June, approximately 73,100 workers in Silicon Valley remain unemployed. That’s almost double the number of unemployed workers reported in March 2020—42,900—according to the analysis.

The region’s recovery is moving at a faster pace than the state and the country, which have unemployment rates of 8% and 6.1%, respectively. But it will take time before Silicon Valley gets back to the pre-pandemic 2.1% unemployment rate of February 2020, Massaro said.

Across the Bay Area, which also includes San Francisco and San Benito counties, education saw the most job losses compared to other industries. In total, the region lost 3,200 jobs in public schools and 1,400 jobs at universities or colleges, according to the analysis.

“The unemployment loss in education at the end of a school year is not surprising,” Massaro said. “But it is a significant amount.”

California also saw a similar increase in its unemployment rate, according to the analysis. The state saw a decline of more than 42,000 jobs and an increase of nearly 100,000 unemployed workers between May and June, resulting in an unemployment rate of 8%.