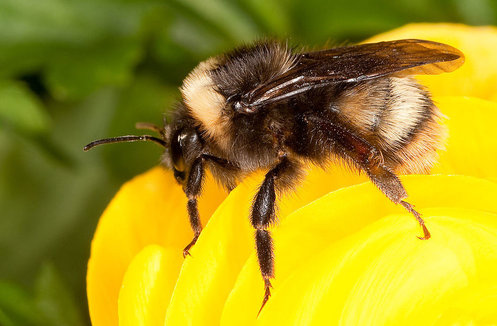 The Western bumblebee population has crashed since the late 1990s. It now is a candidate for listing under the California Endangered Species Act. Photo Credit: Stephen Ausmus / USDA / ARS
by El Observador 05/21/2021

LOS ANGELES — Events are planned across the country this week to celebrate the 16th annual Endangered Species Day, May 21.

In 2006 The U.S. Senate approved a proclamation from California Sen. Dianne Feinstein calling for a celebration on the third Friday each May.

People can raise awareness by joining the Endangered Species Coalition’s chalk party and posting their drawing of an endangered plant or animal on Instagram.

“Individuals do make a difference with endangered species conservation because of the everyday actions they can take,” Robinson explained. “Along with the ongoing efforts of environmental organizations, and positive results of the Endangered Species Act, there have been many success stories of species recovering.”

The state’s endangered species include the California condor, sea otter, sea turtles, desert bighorn sheep and many more. State statistics show California is home to 173 animal species and 286 plant species listed by the state or the federal government as endangered or threatened.

Sarah Starman, national grassroots organizer for the Endangered Species Coalition, invites everyone to get the iNaturalist app and take part in the nationwide Pollinator Party event this weekend.

“On Saturday, May 22nd, go out in their local parks, a garden, a backyard, go on a walk and take pictures of pollinators that they see, like birds, bees, butterflies, bats and also the native plants that those species rely on, like flowers, shrubs, trees,” Starman outlined. “Scientists will use those photos to actually collect data and track species and do research.”

This year the spring count of the Western Monarch butterfly hit an historic low of fewer than 30,000 individuals, down more than 99% since the 1980s.