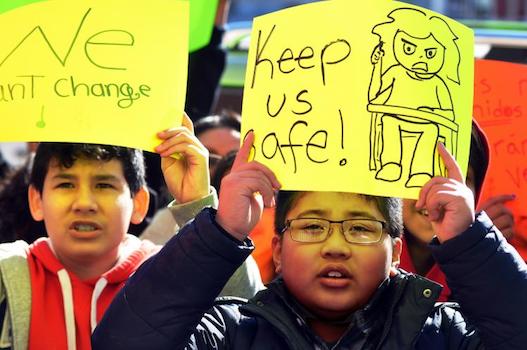 Despite COVID-19 lockdowns, gun violence killed nearly 20,000 Americans in 2020, according to data from the Gun Violence Archive, more than any other year in at least two decades. Photo Credit: preventioninstitute.org / Michael Flesman
by ElObservador 04/16/2021

AUSTIN, Texas — A 10-day road trip by gun-control advocates, calling on senators to pass background checks on all gun sales, will end in Washington, D.C. this week.

Since the first of April, there have been multiple mass shootings in the U.S.

“We should be celebrating the reopening of businesses and schools after a long, brutal year of COVID,” Watts remarked. “And instead, Americans are wondering if gun violence will also be part of the return to normal.”

In a Twitter post last week, Gov. Greg Abbott encouraged lawmakers to bring him legislation to sign that would make Texas a “Second Amendment Sanctuary State.”

Meanwhile, the National Rifle Association, the country’s largest gun lobbying group, is hoping a federal judge in Texas will grant it bankruptcy protection, which would allow them to reincorporate as a Texas nonprofit.

As a white woman living in the suburbs, Watts acknowledged she waited too long to get involved in the issue of gun violence, and did so only because she was afraid her own children weren’t safe in their schools.

“Shame on me, shame on other white women and Americans who waited way too long to get involved in this issue,” Watts commented. “Black and Brown women have been doing this work for decades with very little visibility.”

Watts added the group Moms Demand Action now has six million volunteers, and will make 60 stops in 22 states, culminating with a demonstration in the nation’s capital Friday.

EarthTalk Q&A: What is Climate Feminism?