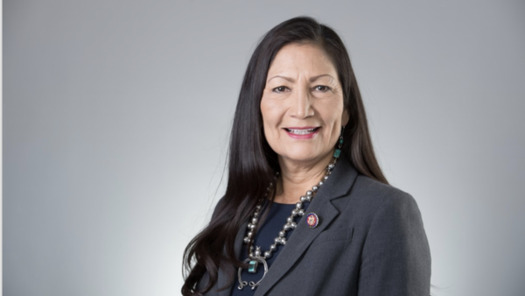 In addition to her historic role in President Joe Biden's Cabinet, Rep. Deb Haaland, D-N.M., made history in being one of the first two Native American women elected to Congress in 2018. Photo Credit: House.gov
by ElObservador 03/19/2021

Rep. Deb Haaland, D-N.M., was confirmed as Interior Secretary in a Senate vote on March 15th, and a South Dakota tribal leader is expressing great optimism as she steps into the role.

Neil “Cody” Russell, Vice Chair of the Lower Brule Tribal Council, thinks she will be a powerful force in Washington for those who consistently have been overlooked.

“I think she’ll make some pretty good decisions for the Natives in and around the United States,” Russell remarked.

He explained he’s confident Haaland will be a fierce defender of environmental concerns among tribes, including fossil fuel projects.

President Joe Biden already has canceled a key permit for the Keystone XL Pipeline, but faces pressure to intervene in the Dakota Access Pipeline as well.

Haaland faced opposition from a number of GOP senators, including those from oil-producing states, who say she has “radical” opposition to new oil and gas leases.

Russell countered it’s reassuring to have someone who Natives feel will respect and honor treaties with tribal governments. He hopes it leads to more positive movement in lands being reclaimed.

“Give the [American] Indians a chance, the Natives a chance in what they were supposed to receive through treaties but didn’t,” Russell argued.

Some of Haaland’s opponents have described her views and policies as partisan, but her supporters note during her short time in Congress, she introduced many bills that received bipartisan backing.

Everything You Need to Know about the Covid-19 Vaccine