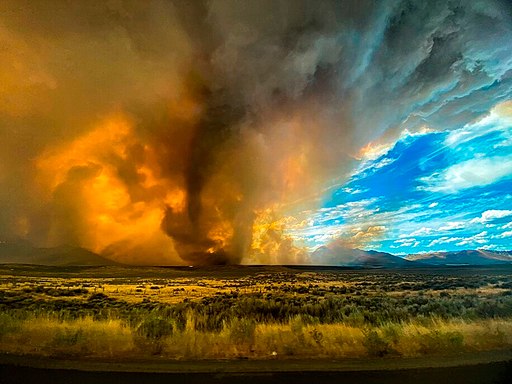 Experts say fires like this one in Loyalton are exacerbated by climate change. Photo Credit: Katelynn and Jordan Hewlett
by ElObservador 10/23/2020

SAN BERNARDINO, Calif. — Latino faith leaders are reaching out to members of Congress urging action on climate change, which is worsening the fires that are choking their neighborhoods with smoke.

The poor air quality also compounds the suffering of COVID patients who struggle to breathe.

Martin Martinez, pastor of Victorious Worship Church in San Bernardino, said COVID has forced him to hold fellowship outside, even as the fires led him to cancel some services altogether.

“I had to make a late call that Sunday morning and tell people, ‘I don’t want you guys to come,'” Martinez recounted. “It’s too toxic of the air. There’s so much smoke here, there’s so much ash falling. We have people with diabetes, lung problems, asthma.”

This summer, select committees on the climate crisis in both the U.S. House and U.S. Senate released reports listing ways to reduce carbon emissions and protect the air, land and water.

Martinez is part of the Hispanic Leadership Network, a group of Latino faith leaders that have spent months asking Congress to turn those reports into legislation.

Shanna Edburg, conservation director for the Hispanic Access Foundation, said there’s a lot Congress can do to reduce the impact of fires and floods and promote things like climate-friendly agriculture, energy efficiency, carbon capture and renewable energy.

“Climate change is an issue that’s really important to the Latino community, and something that they’re very vulnerable to,” Edburg stressed. “And of course, that intersects with the pandemic and the economic crisis. So it’s really a very timely report, and we think action is needed now.”

Edburg noted polls show three in four Latinos want corporations, citizens, the legislative and executive branches to do much more to address the climate crisis.