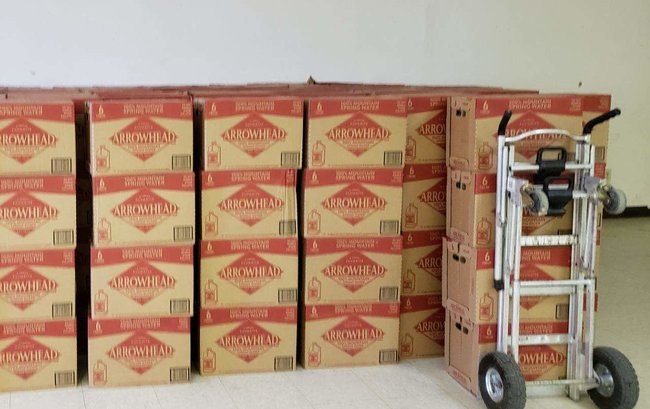 Bottled water is being distributed to needy families in areas where water supplies are compromised, mainly in the San Joaquin and eastern Coachella Valleys. Photo Credit: Isabel Solorio
by ElObservador 04/24/2020

As Californians shelter at home amid the COVID-19 outbreak, an estimated 1 million of them lack access to clean drinking water, one of the most fundamental resources for maintaining health and hygiene.

Lucy Hernandez knew something was wrong when she arrived at a Walmart store in Visalia, California, last month, shortly before Gov. Gavin Newsom issued a statewide stay-at-home order to slow the spread of the coronavirus.

Alarmed, she jumped back in her car and headed to Costco. No water. She tried the 99 Cents Only store, the Dollar Tree and Target. No water. Desperate, Hernandez drove 20 miles to Hanford, but still couldn’t find water for sale.

A grandmother of three, Hernandez lives with nine other family members in the tiny community of West Goshen, just east of Visalia. Residents in the predominantly low-income Latino community distrust the local tap water because it has a history of contamination. Some rely on groundwater from private wells that haven’t been tested for safety. Like thousands of other residents across the Central Valley without access to safe water through their taps, many people in West Goshen rely on bottled water to drink.

“I was in shock,” Hernandez says. “I said, ‘How can this happen? How can we be without water bottles if we need the water?’

“A lot of our residents, they depend on this kind of water, and there was nothing, nothing.”

As Californians across the state shelter at home amid the COVID-19 outbreak, an estimated 1 million of them lack access to clean drinking water, one of the most fundamental resources for maintaining health and hygiene. Many of these residents are concentrated in rural parts of the state, particularly in the San Joaquin Valley, where dozens of small public water systems fail to meet safety standards, data shows.

Nationwide, millions more are exposed to unsafe tap water each year, often from small community water systems that largely serve rural and low-income communities of color. Lead from aging pipes and other toxic chemicals have turned up in urban water supplies as well, most notoriously in Flint, Michigan, in 2014. And a recent report by the Environmental Working Group detected widespread contamination of U.S. drinking water supplies with man-made “forever chemicals,” including in cities such as Miami, Philadelphia, and New Orleans. Contaminated water isn’t the only issue. A third of Americans struggle to pay their water bills, a situation expected to worsen with the economic downturn. That’s especially an issue in Detroit, one of the COVID-19 hot spots, where until recently thousands of residents were without running water. However, some states, including Michigan and California, are now prohibiting water shut-offs during the pandemic.

Last year, California’s governor signed into law Senate Bill 200, creating a $130 million a year Safe and Affordable Drinking Water Fund to support improvements to community water infrastructure. Implementation of that bill is underway, but it hasn’t come in time to help the thousands of people who now find themselves without safe tap water amid the coronavirus pandemic, advocates say.

“The issue of lack of access to tap water is huge in California,” says Michael K. Claiborne, senior attorney with the Leadership Counsel for Justice and Accountability, a community organizing group based in the San Joaquin and Eastern Coachella Valleys. “This new COVID-19 crisis has exacerbated and magnified these problems that communities in California already face.”

Common pollutants found in noncompliant Central Valley water supplies include residual agricultural and industrial chemicals such as nitrates, arsenic, and a compound known as 1,2,3-TCP. These contaminants have been linked to serious health problems such as liver and kidney damage, respiratory ailments, blood pressure disorders, and cancer.

Susana De Anda, executive director of the Community Water Center, which works with communities in the San Joaquin Valley, says she’s worried people with contaminated tap water could resort to cooking with it or-even worse-drinking it. Her organization is hearing from many people in the same situation as Hernandez, she says.

“We’re getting calls and residents are asking, ‘Where can I get water? I’ve been going to multiple stores, and they have no water,'” De Anda says. “That’s a problem. This is California in 2020. The reality is, we need to be able to prioritize this resource for our at-risk communities.”

De Anda and Claiborne say the state should provide funding for emergency bottled water delivery to areas with shortages. Some communities with unsafe tap water already have bottled water distribution programs, Community Water Center Policy Director Jonathan Nelson explains. These programs need to be more widely publicized and applications streamlined so that people can get water supplies as soon as possible, he says.

The advocates applauded Newsom’s recent moratorium on water shut-offs for unpaid water bills during the coronavirus crisis, as well as the restoration of water service to people who had their water turned off for lack of payment since March 4. Nevertheless, that doesn’t resolve the problem for those who lack clean tap water, they say. It also doesn’t address people living without water because of shut-offs that happened before the pandemic, they add.

‘Water is something that everybody needs to live’

Democratic House leaders have proposed including $25 billion in the next COVID-19 stimulus bill to fund clean water infrastructure projects and provide funding for American households struggling to pay their water and sewer bills.

Back in West Goshen, Hernandez is still struggling to find bottled water for her family and neighbors. She searches the stores regularly — even though she fears going out could expose her to the virus — and networks with residents and relatives in other towns through phone and social media to find people with bottled water that they’re willing to share.

She says she wishes the county would have an emergency number people could call to get water, instead of her and her neighbors trying to solve the problem themselves.

“We’re trying to help each other, but if we don’t have the resources, then how can we help?” Hernandez says. “Water is something that everybody needs to live. We need to have water to drink, no matter what.”

Claudia Boyd Barrett wrote this article for YES! Magazine in collaboration with the California Health Report.

Claudia Boyd Barrett is a long-time journalist based in southern California. She writes on topics related to health care, social justice, and maternal and child well-being. Her investigative stories on access to mental health care have resulted in legislative and policy changes. Follow her on Twitter @reporteratlarge.