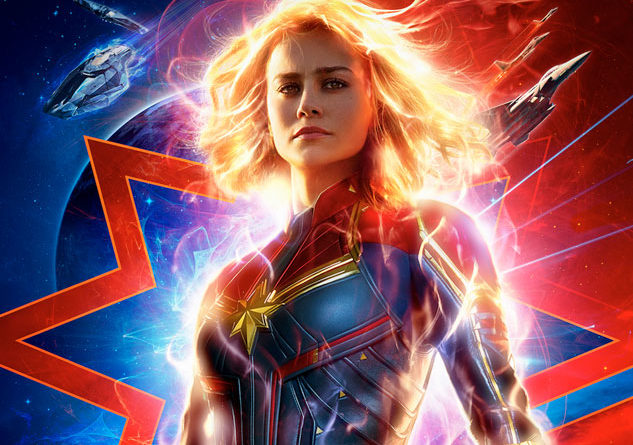 Black Widow (Scarlett Johansson), Gamora (Zoe Saldana), and Storm (Halle Berry) are all female superheroes that have graced the silver screen with their presence long before Brie Larson took on the helm of being Marvel’s first heroine leading their own film. Technically though, Larson’s portrayal of Carol Danvers/Captain Marvel is now the first in the Marvel Cinematic Universe, as it is set in 1995, a full thirteen years before Robert Downey Jr. began the whole thing with “Iron Man”.

For children of the 90s like me, this was great to watch in “Captain Marvel”. In the trailers, and in the movie, Larson’s character, an alien “space police” named Vers, literally drops into the earth, specifically crashing into a Blockbuster Video. I’m assuming 95 was the video store’s prime, like Netflix is now. Seeing old titles on VHS in those scenes was mesmerizing, and a lot of the film pulls on the nostalgia heartstrings with its choices of music, fashion, and references.

The film itself follows the very first Marvel cinematic universe character, as it retroactively explains the reasoning for the government’s push to find these otherworldly beings. Although “Iron Man” began the current cinematic universe in 2008, becoming the first of the eventual Avengers team, “Captain Marvel” takes it back to before there were thunder gods, men in metal suits, and of course, Vin Diesel’s riveting portrayal of Groot, a tree-like alien hero from “Guardians of the Galaxy”.

A lot of the film relies on the idea that Carol Danvers doesn’t know much about her past, and as such is searching for answers on the unknown planet of earth, all the while villains are after her. In the beginning, the amnesiac Larson first plays the alien cop Vers, who after a turn of events begins to realize who she really was/is, Carol Danvers. From there it becomes a movie about identity and the struggle with identity crisis as much as it is about a superhero getting their groove back and being able to save the day in the end as well.

One of the big ideas coursing through the film is that of making your own path and going against the grain of those that don’t see your value or demean you. As much as news articles will hang onto the idea of this being a “girl power” or truly feminist film, (it is partly those things) I feel that any person, regardless of gender, can relate to the premise of forging your own path, and figuratively putting on blinders or cool sunglasses to block the haters and push forth in your own goals.

In the case of Carol Danvers, it includes buddy cop adventure with a de-aged “Pulp Fiction” era Samuel L. Jackson. I can’t get over how good the de-aging technology was so flawless in this movie. Once you see Jackson it’s a little shocking, but then you get used to it and it’s not distracting like some CGI is in other films. Anyway, the most fun is watching this earthling figure out that there are stronger forces out in the universe, way before the eyepatch wearing, stoic figure he becomes in the future of the Marvel universe.

In the end, this film follows a lot of the memorable story structures of the first-time antics of Marvel cinematic universe heroes like Iron Man, Captain America, and even the trippy introduction to Doctor Strange. This isn’t a bad thing. It will not be anything that reinvents the superhero film in terms of its story, but by Thor’s hammer, it will be remembered for its effect on the Marvel Universe going forward, by becoming the genesis of these 20+ movies. And just as important, little girls – and whoever wants to look up to an incredibly powerful female hero – will have Carol Danvers now. A true 90s girl, who we will see once again this year in a crucial role in “Avengers: Endgame”.