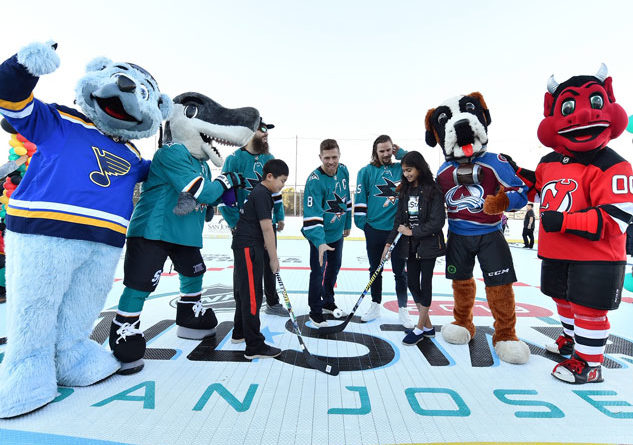 “Downtown San José is booming with recreational and entertainment opportunities and the San Jose Sharks are a vital component of this,” said Raul Peralez, San José City Councilmember. “This quality play space is a testament to the partnership between the Department of Parks, Recreation and Neighborhood Services (PRNS), the San Jose Sharks, the NHL and SAP. When we all come together, the San José community and our youth benefit.”

Construction efforts were spearheaded by the City of San José, who first opened the rink in 1995 to provide a safe and accessible space for children and families in the community. Residents had a first-look at the upgrades which include: a brand new all-weather floor surface, bleachers, dasher boards, and chain link fencing. Future improvements will include a water drainage system, and better lighting to be able to play at night.

“Since joining the NHL, the San Jose Sharks and our ownership group led by Dr. Hasso Plattner, have made it a priority to be an outstanding community partner,” said John Tortora, President of the San Jose Sharks. “Renovating the Roosevelt outdoor rink is both a celebration of the NHL’s All-Star Weekend returning to San Jose and a reaffirmation that our team remains committed to making a positive impact on the lives of youth and families throughout our City. We are proud to have worked with our tremendous partners at the National Hockey League, City of San José, and SAP to renovate this fantastic rink that will promote the game of hockey, encourage health and well-being, and continue to serve as a wonderful gathering place for families for many years.”

“For more than 15 years the NHL has partnered with its Member Clubs to make meaningful contributions that help build vibrant communities that contribute to growing our sport,” said Kim Davis, NHL Executive Vice President, Social Impact, Growth Initiatives & Legislative Affairs. “We see the positive impact playing hockey has on people of all ages, fostering a greater sense of teamwork, dedication, and perseverance – hockey’s core values. This is another example of multiple groups working together, ‘doing good and doing well,’ and the NHL is proud to be part of this team.”

The collective efforts to increase access to hockey also includes hockey programming. This year, Roosevelt Park will host a series of free youth hockey street tournaments for kids in ages 6-18 and Learn to PlayTM hockey clinics. The outdoor rink will also be available for youth and adult pick-up hockey.

The event was held prior to the 2019 SAP NHL All-Star Skills on Friday, Jan. 25. The Sharks previously hosted the event in 1997.