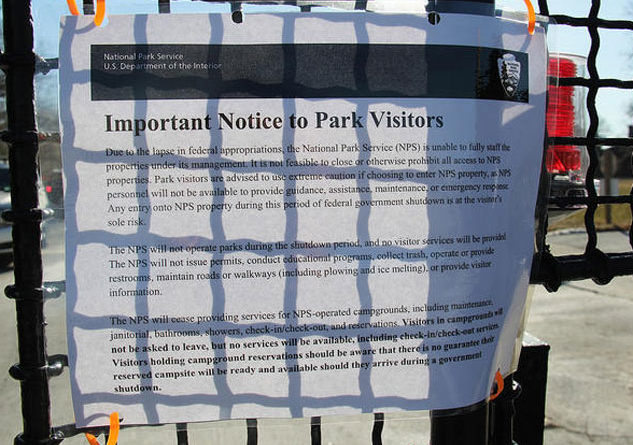 Nearly 16,000 employees are furloughed at the National Park Service and most of its maintenance and visitor services. Photo Credit: NCPA
by ElObservador 01/18/2019

WASHINGTON – Visitors at national parks across the country are witnessing mountains of trash, overflowing toilets and damaged property as several sites remain open during the government shutdown.

Two groups are calling for an investigation of the U.S. Department of the Interior by the Office of the Inspector General, into what they say is a reckless decision by the department to keep many parks open without enough staff to ensure visitors and natural resources are protected.

Kristen Brengel, vice president for government affairs for the National Parks Conservation Association, says the last thing the department should be doing is inviting more people into potentially dangerous situations.

“They’re essentially manufacturing a crisis here by allowing parks to remain open,” she points out. “If parks were closed and just had essential staff, then those staff who were there would just be monitoring the parks to make sure that they were safe.”

To address some of the problems, the National Park Service issued a statement that it would divert funds from camping and other fees to “ensure that parks are protected, and that visitors can continue to access parks with limited basic services.”

Brengel says the agency is breaking the law by doing so.

Democracy Forward, a nonprofit watchdog organization based in Washington, maintains the department is violating at least four separate provisions of federal law.

The group’s press secretary Charisma Troiano lists the National Environmental Policy Act and the Federal Lands Recreation Enhancement Act in addition to the diversion of funds from entrance and parking fees.

“On its face, this action violates the Antideficiency Act, but it also violates the Endangered Species Act,” Troiano states. “The Department of Interior is required to ensure that its actions and its inactions don’t jeopardize the existence of endangered species or threatened species or their habitats.”

A Park Service spokesman says the agency consulted with Interior’s Office of the Solicitor and determined that it could use funds from other fees.

The agency announced Friday that it has resumed trash collection and sanitation services at its parks within Washington, and select parks around the country.

Troiano and Brengel are urging Congress and the president to open the government to resume normal park operations.