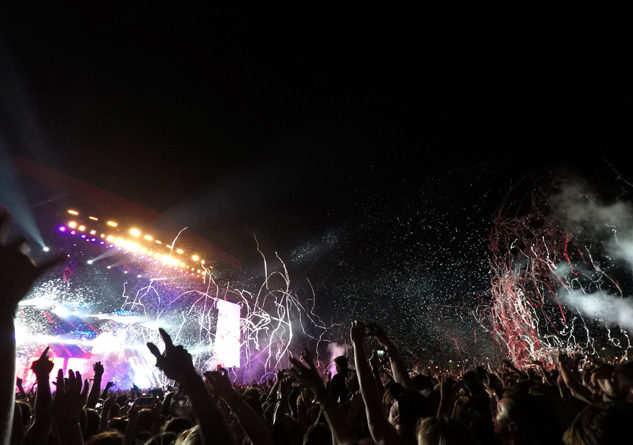 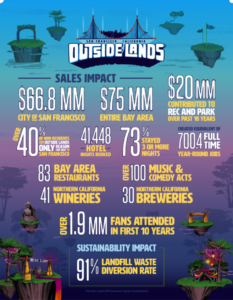 San Francisco, California (June 13, 2018)—The Outside Lands Music Festival today released a study outlining the economic impact the annual event has on San Francisco and the surrounding Bay Area.

The report estimated that the festival generated $66.8 million in economic activity for the city of San Francisco, and $75 million for the entire Bay Area in 2017. The festival also increased incomes by $32.6 million, created the equivalent of 700.4 full time year-long jobs, and paid $9,465,668 in state and local taxes.

“San Francisco has been on the leading edge of live music for decades and Outside Lands keeps us securely on the map in the music world,” said Joe D’Alessandro, President and CEO of San Francisco Travel Association. “The economic numbers this study has yielded prove that the festival’s reach goes far beyond just the entertainment business.”

The report—conducted by Marin Economic Consulting and commissioned by Outside Lands organizers, Another Planet Entertainment and Superfly—utilized both an on-site survey and an online survey of the demographic characteristics and spending patterns of festival attendees. From this data, the researchers created estimates of the amount of new spending that occurred as a result of the festival. These estimates were then used to assess the overall economic impact in the form of increased output, incomes, and jobs for City and Bay Area businesses and residents.

Findings from the report include:

Outside Lands has also contributed over $20 million to San Francisco Recreation and Park in the past 10 years and has established an endowment for a year-round, full-time gardener for the Polo Fields. Outside Lands is a full cost-recovery event, with the festival paying for all city services related to the festival.

“We are proud to have built a strong relationship with the City of San Francisco over the past decade and have prioritized making the festival a benefit for the city,” said Allen Scott, Head of Concerts and Festivals at Another Planet Entertainment and co-producer of Outside Lands. “We look forward to continuing this relationship for many years to come.”

The festival returns to Golden Gate Park for its 11th installment August 10-12 and features an impressive lineup, including headliners The Weeknd, Florence + The Machine and Janet Jackson. Tickets are available at www.SFOutsideLands.com.