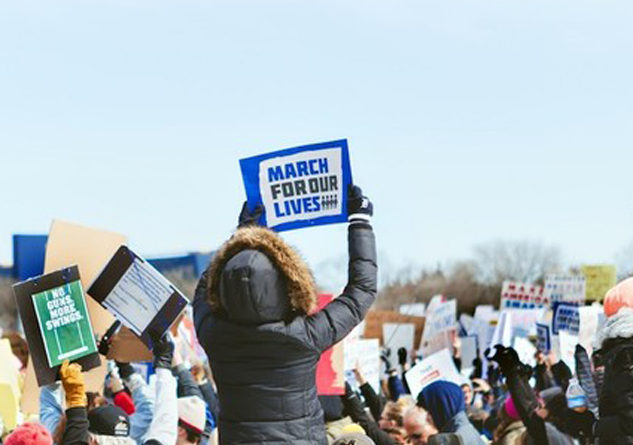 The Feb. 14 shooting at Marjory Stoneman Douglas High School in Parkland spawned the March for Our Lives. Photo Credit: Twenty20
by ElObservador 06/08/2018

PARKLAND, Fla. – Student activists with the March for Our Lives movement are rallying around a new hashtag, “Road to Change,” as they embark on a summer road trip to help register young voters and promote stricter gun laws. The students fighting to eliminate gun violence in America announced their two-month summer tour Monday morning.

The goal is to travel to cities across the country following their March 24 march on Washington. Road to Change kicks off June 15 at the Peace March in Chicago. The bus tour will make more than 75 stops through August.

Marjory Stoneman Douglas High School graduate Cameron Kasky is the founder of March for Our Lives.

“At the end of the day, real change is brought from voting,” he says. “We are encouraging people around the country to educate themselves on their vote, to get out there and turn voting into more of an act of patriotism than a chore.”

Student activists also will hold a separate, simultaneous tour making 25 stops in Florida alone, visiting every congressional district in the state. In response, the NRA has retweeted a Smith & Wesson tweet promoting a handgun, with a caption “Take the easy road.”

March for Our Lives student activist Jaclyn Corin says she hopes they will pick up lots of support along the way. The plan is to round up enough voters to oust politicians who resist gun-control policies.

“So it’s not just us,” she says. “We’re going to be including all types of students. We’ve created friendships with the kids from Chicago and we hope to create friendships through all the stops we make.”

The roughly 4 million Americans who turn 18 this year will add a surge of youthfulness to the electorate – that’s if they register to vote.