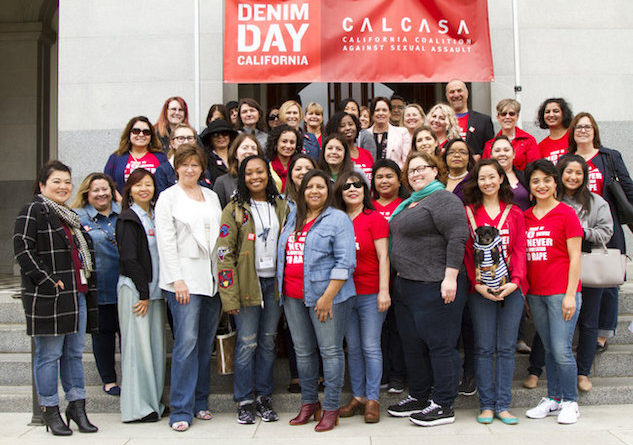 Advocacy groups that support victims and survivors of sexual assault rallied on the steps of the California State Capitol in April 2017. Photo Credit: CALCASA
by ElObservador 04/25/2018

SACRAMENTO, Calif. – Today is Denim Day at the Capitol. It isn’t just an early “casual Friday,” but a show of solidarity for victims and survivors of sexual violence.

Many lawmakers and victims’ advocates will be wearing jeans at a 10 a.m. rally on the Capitol steps in Sacramento to draw attention to the problem. It’s a tradition that began after a controversial Italian Supreme Court ruling in 1999 that denied a woman’s rape accusation because she’d been wearing tight jeans and supposedly would have had to help remove them, implying consent.

“We just released a report – it’s the ‘Cost and Consequences of Sexual Violence in California’ – and in 2012 alone, there were 948,000 California residents that experienced sexual violence,” she said.

Campos’ group and the California Partnership to End Domestic Violence are asking legislators to support a budget request of $50 million from the state general fund, for communities to do more education and public-engagement events that teach about consent and healthy relationships.

Campos said a recent study showed the state of California paid $9 billion in 2012 responding to sexual violence. She described the intangible costs, which increase that figure to $140 billion a year.

“The tangible costs include medical, mental-health care, prevention, investigation, sanctioning, treatment, victim services – that totals over $9 billion,” she said. “And so, when the intangible costs are included, such as lost quality of life and lost work productivity, that totals the $140 billion.”

She said the annual event takes on extra significance this year, with the rise of the “Me Too” movement and sexual-harassment scandals. The groups also are championing Assembly Bill 2079, which combats sexual violence against the thousands of women who clean large office buildings at night by providing training for janitorial workers on prevention of sexual violence and harassment.

The report is online at calcasa.org and the text of AB 2079 is at leginfo.legislature.ca.gov.

“BIG BROTHER” MAY BE A CORPORATION; NOT BIG GOVERNMENT”