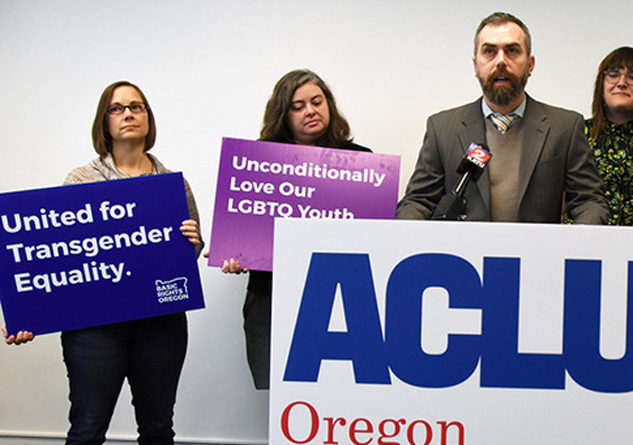 DALLAS, Ore. — A lawsuit is challenging an Oregon school district’s policy protecting transgender students – but opponents say the case should be thrown out.

The ACLU of Oregon wants to intervene on behalf of Basic Rights Oregon, the state’s largest LGBTQ advocacy group, in a case in the Dallas School District, located near Salem. A group known as Parents for Privacy sued the district in November over its policy allowing students to use bathrooms and facilities that conform to their gender identity.

“We feel like it’s fundamentally mean-spirited and transphobic and motivated by a desire to exclude trans students from school life and not respect their dignity,” Herzfeld-Copple says.

Parents for Privacy says the school district is violating the rights of other students by accommodating transgender students. Similar cases against school districts in Illinois and Pennsylvania have failed in recent years. The ACLU still is waiting to hear if it can intervene or if the case will be dismissed. The Dallas School District also has filed a motion to dismiss the case.

“We worked with the Oregon Department of Education in 2016 to release new guidelines that are trans-inclusive and are among some of the strongest guidelines in the country to make sure that K-12 schools are providing a safe and inclusive learning environment for trans students,” Herzfeld-Copple explained.

Oregon has strengthened protections even as the federal government has weakened them. Last year, the U.S. Department of Education rescinded guidance that outlined federal protections for transgender students.