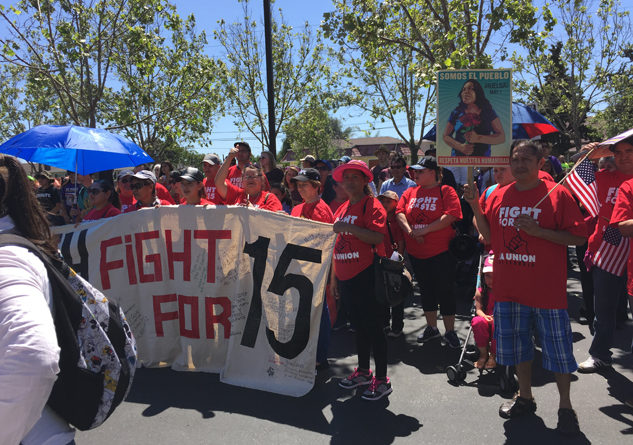 SAN JOSE, CA – Fast-food workers in the Fight for $15 will rally during the lunchtime rush at McDonald’s in San Jose Monday, joining protests stretching coast to coast on the 50th anniversary of the historic Memphis sanitation strike, which became a rallying cry of the 1968 Poor People’s Campaign led by Dr. Martin Luther King, Jr.

San Jose workers will vow to continue the sanitation workers’ fight for higher wages and union rights and show their support for cooks and cashiers across the Mid-South who will be striking Monday for $15 and union rights. Local fast-food workers will also announce Monday they will participate in six weeks of direct action and nonviolent civil disobedience beginning Mother’s Day as part of the new Poor People’s Campaign: A National Call for Moral Revival, uniting two of the nation’s most powerful social movements in a common fight for strong unions to lift people of all races out of poverty.

The protests and strikes across the country will culminate in a 1,500-person march in Memphis from Clayborn Temple to City Hall – the same route sanitation workers walked 50 years ago – led by strikers in the Fight for $15 from across the Mid-South, Memphis sanitation workers who participated in the 1968 strike, and prominent labor and civil rights leaders.

WHO:  Local cooks and cashiers in the Fight for $15

WHAT: Protest at local McDonald’s on 50th anniversary of historic Memphis sanitation strike

The Fight for $15 has caught on throughout our nation and around the world and won big wage increases from coast to coast including California’s landmark 2015 victory which will raise the wage to $15 by 2022. Now, California fast food workers and others who lack a collective voice on the job are launching a renewed fight for a union to ensure the promise of $15 translates into real gains.

The Memphis sanitation strike began on Feb. 12, 1968, when hundreds of Black men went on strike for recognition of their union, a local of the American Federation of State, County and Municipal Employees, and demanded a raise to $2 an hour – the equivalent of $15.73 today after inflation. Strikers marched daily from Clayborn Temple to Memphis City Hall holding signs declaring, “I AM A MAN.”

Ahead of the strike and protests, the Fight for $15 launched a new website where visitors can create their own versions of the iconic “I AM A MAN” sign. People visiting the site can enter their own descriptor in lieu of ‘MAN’ and share their customized sign on social media. Submissions will be turned into printed signs that workers will carry in Memphis on Feb. 12.

The Feb. 12 strikes and protests come as politicians have cut minimum wages and attacked unions across the country, disproportionately harming workers of color. Workers in predominantly Black cities including St. Louis, Mo., Kansas City, Mo., and Birmingham, Ala., have had minimum wage increases nullified by white state lawmakers in recent years. Meanwhile, union jobs in state and local government – which have historically provided a pathway to the middle class for workers of color – have been under attack from corporate-backed politicians like Illinois Gov. Bruce Rauner, who has refused to bargain a contract with state employees for nearly two years to break their union.

And people of color remain over-represented in low-paying industries like fast-food: more than half of Black workers and nearly 60 percent of Latino workers are paid less than $15, according to an analysis by the National Employment Law Project.