An East Side Music Fest 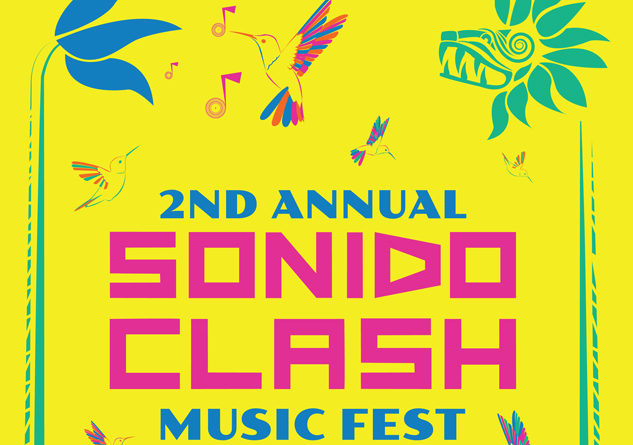 As avid readers may remember, we have spoken to the music collective Sonido Clash a few times now, and each time they are upping the ante on what they can do in San José for culture and community.

Last September was Sonido Clash’s first foray into throwing a festival, which according to them is quite different and expansive compared to one of their traditional downtown get-togethers.

“So the first music festival came with a lot of heartache and stress, but we always had this idea that we wanted to do a music festival, especially one that was all-ages, and we wanted to do something in the east side. Then the opportunity came that we could do it last year and through grants we went ahead and did it,” Zepeda says.

In some ways the collective aims higher because they want to do more for the local population of San José but at the same time experiment with what groups of people they can converge and bring together. Zepeda says, “I think shifting from doing these events at clubs or parties, it’s just Sonido Clash maturing. It’s trying to take it to the next level. Kind of getting away from doing small parties and doing these larger events.”

Nguyen adds, “My experience is coming to Sonido Clash, starting with their marketing as they were doing parties consistently on the monthly, and seeing that growth. It was kind of as if building that consistency within the community and credibility within the community led them and prepared them for the moment of the festival and taking a lot of the opportunities that San José had to offer, especially for people of color.”

Last year’s initial festival saw over 500 attendees, and a whopping 24 musical acts at the School of Arts and Culture at the Mexican Heritage Plaza.

“I think personally, it was a success for being the first one, and we only had three weeks to do it. We didn’t spend any money out of our pockets, we broke even and that’s successful, just hearing from other people that throw events. There was a lot of things that we learned, and that we want(ed) to tackle this year,” says Zepeda.

One aspect that needed to change in order to better utilize the time and space of the Mexican Heritage Plaza is according to Nguyen, the number of acts and who they brought in as partnerships.

“I guess because we got so excited, one of the things was that we had so many artists, so scheduling was something that was like, ‘okay, maybe we shouldn’t have too many artists on the bill,’ because the logistics.”

Nguyen says that the 5 members of Sonido Clash were leading the charge, working with volunteers to hectically load and unload acts onto the stage.

“What made it different this year is that we really thought about what partners to reach out to help us fill up that space, and to take lead and ownership of that space. And it’s a trusted partnership too.”

The groups that are featured at the festival include Poetry Center San José, South Bay DIY Zine Collective, and Veggielution. They are collaborators of Sonido Clash which share the same goals of community buildings and the arts, and have mutual appreciation for one another.

“We see what you’re doing in the community, we like what you do, like how you support us, this is how we can support you,” says Nguyen.

The music this year, down to 11 acts plus the 5 Sonido Clash resident DJ’s, aims to please people of all tastes and ages.

“I personally always wanted to get a traditional cumbia band, we also wanted to do somebody like Prayers who are making a name for themselves, playing Coachella and all these music festivals all around. To bring that quality to the East Side,” says Zepeda.

Zepeda adds, “I think people will enjoy it, it’s dance-y, chill. We just wanted to have a diverse group of artists, there’s not one artist that has the same sound as another one. Everybody is different that we picked, that was the goal, have something that’s fresh. I see a lot of music festivals that are Latino that will end up getting Mana, or Caifanes, and that’s cool but it’s just doing the same over and over. These artists are fresh, and new.”

In the end the group hopes that there is greater attendance, and a lot of diverse people having fun and enjoying what they worked so hard on. After all, the event is moving the constantly evolving and sometimes alien downtown area entertainment to their backyard.

Nguyen says, “I think for me, and I feel that for a lot of people, especially in the east side, what makes San José, it is the diverse cultures, it is the Mayfair, it is the east side. We’re a million more strong and a lot of the people within the 280, 680 border is a very intimate and vibrant community with multiple cultures. It’s the cultural history that really sticks out and if we don’t take opportunity to highlight those areas and activate those areas it’s always going to be seen in downtown.”

A Sonido Clash 2nd Annual Music Festival guide can be found on pages 4-5 in this week’s edition.