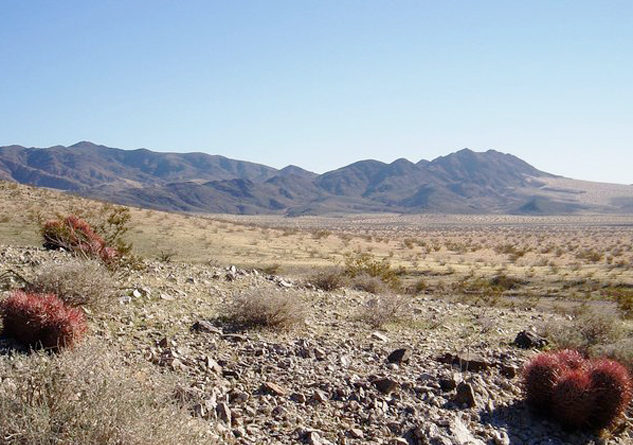 Mojave Trails National Monument, which connects Joshua Tree to Death Valley, could be downsized under a review by the U.S. Dept. of the Interior. Photo Credit: Bryn Jones
by ElObservador 07/21/2017

The agency is reviewing 27 national monuments, including six in California with an eye to protecting the smallest, key areas, which could open up the rest to development.

“What people value in the deserts out here are, number one: scenic vistas uninterrupted by manmade objects,” he states. “And without this status, this land is very subjected to windmills, solar fields and the mining industry.”

In a recent letter to the Interior Secretary, a dozen Western Republican members of Congress complained that the various monuments hurt ranching, timber, energy, and ATV and mining interests.

“Open space and quality public lands are beneficial to families, visitors and businesses alike,” Spurr stresses. “I think it brings economic windfall to an area to be adjacent to any of these protected lands. The visitor economy is so much more robust than the mining industry.”

Millions of people submitted public comments about the monuments, and the comment period ended on Monday. The vast majority supports keeping the monuments intact.

Interior Secretary Ryan Zinke’s final report is due on Aug. 24. Conservation groups have already vowed to sue if the administration tries to rescind any monument designations.

What are some ways companies are using plastic waste from the ocean in their products to take a stand for the environment?

Blu-Ray Look: Ghost In The Shell