Blu-Ray Look: Ghost In The Shell 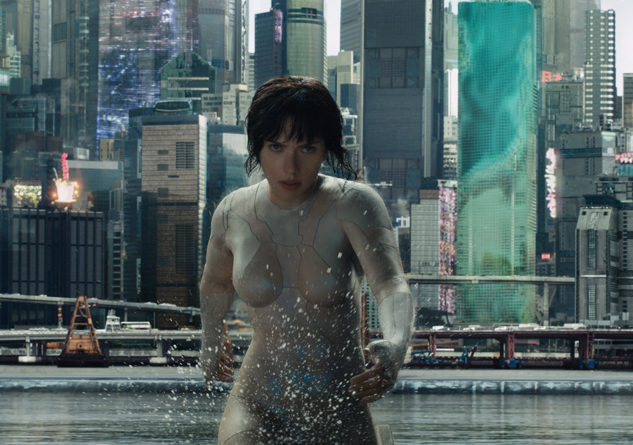 Scarlett Johansson is the main protagonist, Major, in the visually stunning “Ghost in the Shell”. Photo Credit: Paramount Pictures
by ElObservador 07/21/2017

“Ghost in the Shell” arrives on 4K Ultra HD, Blu-ray 3D, Blu-ray, DVD, and Video on demand on July 25th, bringing home the eye candy fest that audiences were able to experience in cinemas.

Out of the gate, the film gets compared to the original anime and it’s difficult to compare the two without going into a longer film history and film theory discussion so I’ll leave it at this: This “Ghost in the Shell” is a slick, functional sci-fi action film filled with discussions on humanity, advanced technology’s role in life, and identity.

The film on its own is luscious in its visuals and takes a lot of cues from our actual reality now. Prosthetics and artificial intelligence are imagined in this not so distant era.

Set in a world where people are enhanced with technology, “Ghost in the Shell” follows Major (Scarlett Johansson), who is the first of her kind, a human mind inside an artificial body designed to fight the war against cyber-crime for a company called Hanka Robotics.

While investigating a dangerous cyberterrorist hacker, (hacking in this world can be done to humans, machines and the hybrid in-betweens as well), Major makes a shocking discovery – the corporation that created her lied about her past life in order to control her.

Now putting trust only in her tight-knit military unit, “Section 9”, she begins to unravel what exactly her humanity was, is, and where her loyalties lie in this futuristic world.

As I mentioned before, the film is slick looking, and the attention to detail is remarkable. The visual language of the film is neon, metal and rain and although this may sound kind of gloomy, there is a lot of color and it certainly pops in the Blu-ray edition. The sound is crisp and dialogue doesn’t get muffled even when there’s the high intensity score rising in the background of when there’s shootouts. It features a Dolby Atmos audio track as a default, and it goes a long way to make even a sound bar show the complexities of this world and its sound.

Special features I noted were access to a Digital HD copy of the film as well as the following:

The highlight of the bonus content is the featurette called “Hard-Wired Humanity: Making Ghost in the Shell” which has a lot of background on how the creators and actors tackled the lore of “Ghost in the Shell”. It was my favorite and learned additional tidbits of information that I’ll probably bring up if anyone brings it up at a party or something.

In the end “Ghost in the Shell” is a really cool spectacle to watch on your screen and I recommend checking it out to see just how inventive this world is, and how the visual and narrative aspects of it was translated from the original anime. If you’re into cyberpunk, “Matrix” style worlds, or Scarlett Johansson, this one should be right up your alley.