What are some ways companies are using plastic waste from the ocean in their products to take a stand for the environment? 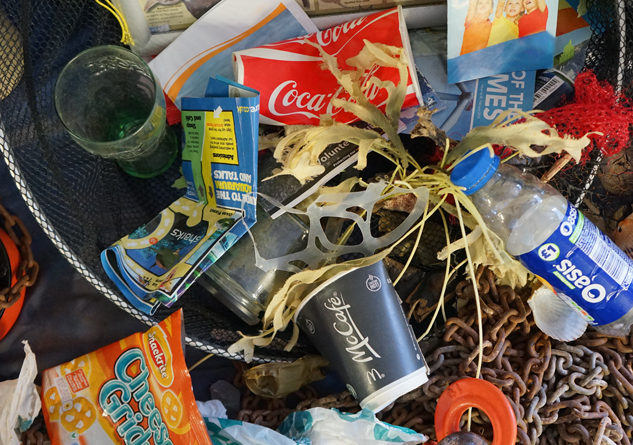 A recent study published in the journal Science estimates that there are some 86 million metric tons of plastic in the world’s oceans today—and that every year we add another eight million more. The pieces of plastic we discard break down into smaller and smaller bits during their travels through the ocean, but never break down completely, becoming part of our food chain when consumed by marine life. According to the non-profit Plastic Oceans, plastic particles outnumber plankton (the feedstock of the marine food chain) by a factor of 26 to one in some parts of the ocean. Meanwhile, the BBC reports that anyone consuming an “average amount” of seafood in a given year ingests some 11,000 plastic particles annually.

The good news is that some companies are trying to do their part by collecting and incorporating ocean plastic debris into their products lines and packaging. Most recently, Canada’s Lush Cosmetics announced it would start using in its packaging ocean plastic collected by volunteers in and around Vancouver, BC, where the company is based. Meanwhile, Method Home has been working with its recycling partner Envision Plastics to take plastic waste collected from beaches around Hawaii to go into its new line of Home Dish+Hand Soap bottles, now available coast-to-coast. Furthermore, Method’s soaps are mostly biodegradable and the company powers its factory with renewable wind energy.

Perhaps a more surprising user of ocean waste plastic is Dell Computers, which recently started processing plastics collected from beaches, waterways and coastal areas and using them as part of the packaging system for its leading “2-in-1” laptop line, the XPS 13. Likewise, German activewear maker Adidas has partnered with the non-profit Parley for the Oceans in launching three lines of its popular UltraBoost shoes all made from plastic debris from oceans and beaches. Each pair reuses 11 bottles worth of plastic and features laces, heel linings and sock liners also made from recycled materials.

Meanwhile, Norton Point sunglasses teamed up with the non-profit Plastic Bank in launching three styles of eco-friendly sunglasses made out of plastic collected around Martha’s Vineyard in Massachusetts where the company is based.

And then there’s Pharrell Williams’s newly released clothing line, G-Star RAW, which uses plastics salvaged from shorelines around the world and turns them into a clothing fiber called Bionic Yarn. Jeans, graphic tees and kimonos are the company’s first products using the nouveau earth-friendly fiber, but fashion forward consumers should stay tuned for different products and styles coming soon.

Yet another twist on keeping plastic waste out of the ocean comes from Florida-based Saltwater Brewery. By now, we all know about how those plastic six-pack can holders can get wrapped around unsuspecting marine wildlife and choke them or cause internal distress if ingested—so the small beer maker has started manufacturing so-called Edible Six Pack Rings made from barley and other natural materials that break down easily once in the ocean water column and are easy for animals to digest, just in case one or two gets loose during your next picnic or outing on the water.