for Humanitarian of the Year Award 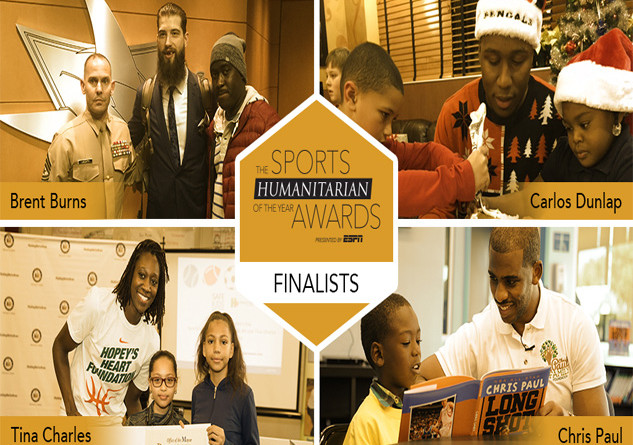 The second annual Sports Humanitarian of the Year Awards, presented by ESPN, will celebrate and honor leagues, teams, individuals and members of the sporting community that are using the power of sport to make a positive impact on society. The sports industry-wide event will return to The Conga Room at L.A. Live, Tuesday, July 12.

Laila Ali will return as host for the event, which will feature a performance by Grammy-nominated singer-songwriter Andra Day. Highlights of the evening will be showcased during a 30-minute program on ESPN, July 15, at 7 p.m. ET.

The net proceeds of the event will benefit the Stuart Scott Memorial Cancer Research Fund at The V Foundation. The evening’s sponsors include Lilly Oncology and the Conga Room. Additionally, ESPN will grant a collective total of nearly $800,000 to the charities of the nominees and winners, double the amount awarded last year. In total, more than $1 million will be distributed to the community as a result of the initiative.

Nominees for the four categories and the honorees for the Stuart Scott ENSPIRE Award include:

• League Humanitarian Award: Winner to be announced at the dinner, July 12

The finalists and winners have been determined by an independent selection committee, which includes: Derreck Kayongo, CEO of the Center for Civil and Human Rights; Nancy Lublin, founder and CEO of Crisis Text Line; Sab Singh, founder of Sports Doing Good and professor at Farmingdale State College; Caryl Stern, CEO of the US Fund for UNICEF; and Eli Wolff, director of the Inclusive Sports Initiative at the Institute for Human Centered Design and co-director of the Royce Fellowship for Sport and Society at Brown University.

“We are honored to once again gather the sports world to recognize these charitable individuals and organizations,” said Kevin Martinez, ESPN vice president of Corporate Citizenship. “Thanks to the collective support from numerous sports leagues and our sponsors, the inaugural Sports Humanitarian of the Year Awards was an enormous success with significant funds awarded to The V Foundation’s Stuart Scott Memorial Cancer Research Fund as well as so many other impactful causes. We plan to build upon that, and make this year an even more powerful showcase of how the power of sport can ENSPIRE social change.”

Below are the award descriptions, nominees and honorees for the 2016 Sports Humanitarian of the Year Awards.

Nominees (winner to be announced at awards ceremony July 12):

•Brent Burns, San Jose Sharks: Influenced by his grandfather’s service during WWII, Brent Burns has worked tirelessly with United Heroes League, formerly known as Defending the Blue Line, an organization dedicated to ensuring military members are healthy and active through sports, since 2009. Dubbed “Burnzie’s Battalion,” Burns has donated more than $1.2 million in suite tickets to United Heroes League, regularly meets with veteran and active duty military members and has donated thousands of pieces of hockey equipment to military families. Burns also partners with Folds of Honor to provide scholarships to family members of injured and deceased military personnel.

• Tina Charles, New York Liberty: Inspired by her late aunt, Tina Charles founded The Hopey’s Heart Foundation and has donated half her WNBA salary the past two seasons to help reduce the chance of student athletes succumbing to Sudden Cardiac Arrest. Knowing that an Automated External Defibrillator (AED) can increase someone’s chance of survival by 50%, Charles has placed more than 200 AEDs in schools, athletic teams and recreation centers worldwide. She’s also partnering with organizations like FIBA Europe and AAU Sports to change regulations so that every team has access to an AED.

• Carlos Dunlap, Cincinnati Bengals: Fueled by the passion of his parents, education has always been a priority for Carlos Dunlap. That’s why he created the Dunlap Scholars Program, which provides ACT and SAT prep and college readiness courses, mentoring and job interview training to underprivileged student athletes in Cincinnati. From throwing birthday parties for homeless kids who have never had one, to hosting a back to school “fun day” to get kids the important supplies they need, Dunlap is personally invested in ensuring youth feel nurtured and supported.

• Chris Paul, Los Angeles Clippers: Through the Chris Paul Family Foundation, Chris Paul works tirelessly to level the playing field in education, sports and community. In honor of his late grandfather, Paul established the Nathaniel Jones Scholarship Fund, which annually provides two full-ride scholarships to his alma mater Wake Forest. This past year, he and the Foundation opened three technology labs in communities across the country, including one at a newly refurbished Boys & Girls Club in the Los Angeles neighborhood of Watts. The renovation is part of the $1 million commitment the Foundation has made to Boys & Girls Clubs across the country.