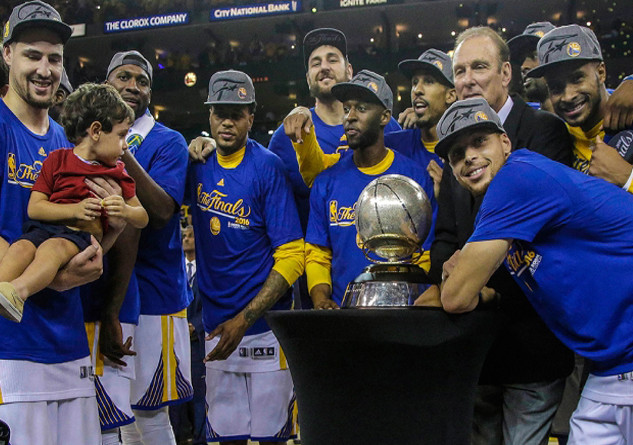 – The 2015 NBA Champion Golden State Warriors have advanced to the NBA Finals for the second consecutive season following Monday’s 96-88 home win over the Oklahoma City Thunder, earning the Western Conference crown with a 4-3 series victory over the Thunder. At time of writing, the the Warriors will host Game 2 of the Finals against the Cleveland Cavaliers on  Sunday June 5th at 5:00 p.m. at Oracle Arena.

With Monday’s decisive Western Conference Finals series victory, Golden State moves  on to the Finals for the eighth time in franchise history, doing so in back-to-back seasons for the first time since 1947 and 1948—the first two Finals in league history. Warriors Head Coach Steve Kerr is the first coach to lead his team to the Finals in his first two seasons as a head coach since Pat Riley’s Lakers earned four-straight Finals berths from 1982-85. The Warriors are the first professional sports team in the Bay Area to earn consecutive championship berths since the Oakland Athletics made back-to-back World Series appearances in 1989 and 1990.

The Warriors advanced to the Finals by winning their first Game 7 since 1975, when they defeated the Chicago Bulls in Game 7 of the Western Conference Finals. Golden State became just the 10th team in NBA history to win a best-of-seven series after facing a 3-1 deficit in the series (out of 233 teams in that position).

Why does Donald Trump think we should renegotiate the Paris climate agreement?