The Food for the Faithful

Behind the Scenes of the Concessions at Levi’s Stadium, Where Data Analysis, Fan Feedback and Free Hot Dogs Merge To Create Better Experiences at 49ers Games

Alison Lu is part of the San Francisco 49ers business strategy and analytics department, who help the stadium by analyzing data to evolve the concession and merchandise options at Levi’s Stadium. Photo Credit: San Francisco 49ers
by ElObservador 10/07/2022

Some of the cornerstones of attending a football game, besides the game itself, include taking in the atmosphere, the thousands of fellow fans, the merchandise, the libations and food. As the buzz of cheers and chatter surrounds you on a concourse, you walk up to a line to order a hot dog or a lemonade and there they are, ready for your enjoyment.

Behind the scenes there are teams of people that transport, make and hand you your concessions. And going even further than that, you have teams of people analyzing data, crunching the numbers, and trying to figure out what will be the best concession options for your enjoyment for your day at the stadium.

This is exactly what happens at Levi’s Stadium, the state-of-the-art home to the San Francisco 49ers since 2014. One of the most popular of the NFL franchises, it not only houses room for tens of thousands of people on game days, but has an innovative approach to food and concessions within.

Since 2020 the 49ers have offered the Member Inclusive Menu, which includes concession items with season tickets. This allows people to have included food and beverage items on their gamedays, offering a value to those who have already invested in the team by becoming season ticket holders.

Alison Lu is part of the San Francisco 49ers business strategy and analytics department, and is also heavily involved in the concessions area of the organization. She recently lifted the curtain to give insight on what it means to listen to fan and customer feedback, and continually try to refine and get the best choices for people at the football games.

With this new season already underway, Lu tells us they have made even more changes and improvements to the Member Inclusive Menu, and to the food and beverage options in general at the stadium, to bring more choices for attendees. These changes come from analyzing data and customer satisfaction surveys.

“In general, we use the data that we collect in fan feedback to drive what our decisions are and our changes to every season to make sure that we’re addressing fan feedback and making sure that the fans have a great concessions experience,” says Lu. “We heard feedback on some of our hot dogs and nachos, and so we have a new hot dog that has, like, a brioche bun and a bigger hot dog. It’s quite delicious.”

Beyond updating the classic hot dogs, which Lu says are the most popular item on the Member Inclusive Menu besides water, they’ve brought in new food partners as well, from the simple but effective nachos, by way of Tostito’s joining the stadium, to local donut place Psycho Donuts adding their sweet and funky spin on the donut.

Other food partners have had their locations expanded within the concourse, like Mexican restaurant Puesto and Tony G’s Pizza.

And one other interesting data point from last season: 300,000 free concessions items were distributed.

“Basically everyone who got an item for free, whether it was like water, chicken tenders, hot dogs, that was the total amount that we gave out, which is about 30,000 a game, which was pretty much to everybody who’s eligible,” says Lu.

At the end of the day, all the data driven decisions and input Lu and her team consider when adding things and changing things for concessions and merchandising is driven by making the experience of enjoying a 49ers game all that more memorable by the food, drink and merchandise options available. Especially for those faithful fans that are there the handful of home games throughout the season.

“These ticket holders are the fans who are going to be with us in rain or shine, and we want to make sure that they feel valued as one of our most loyal fans. And so that’s one of the reasons why we rolled out this Member Inclusive Menu for the season ticket members specifically, so that they can share this experience with their families when they come through and ensure that the game day experience is really great for them and their guests.”

Lu adds, “Because the fans are only here ten days a year, right. We want to make sure that it’s an unforgettable experience for them so that they keep on coming back.”

More information on the new concession offerings and the stadium in general can be found at levisstadium.com/concessions/ 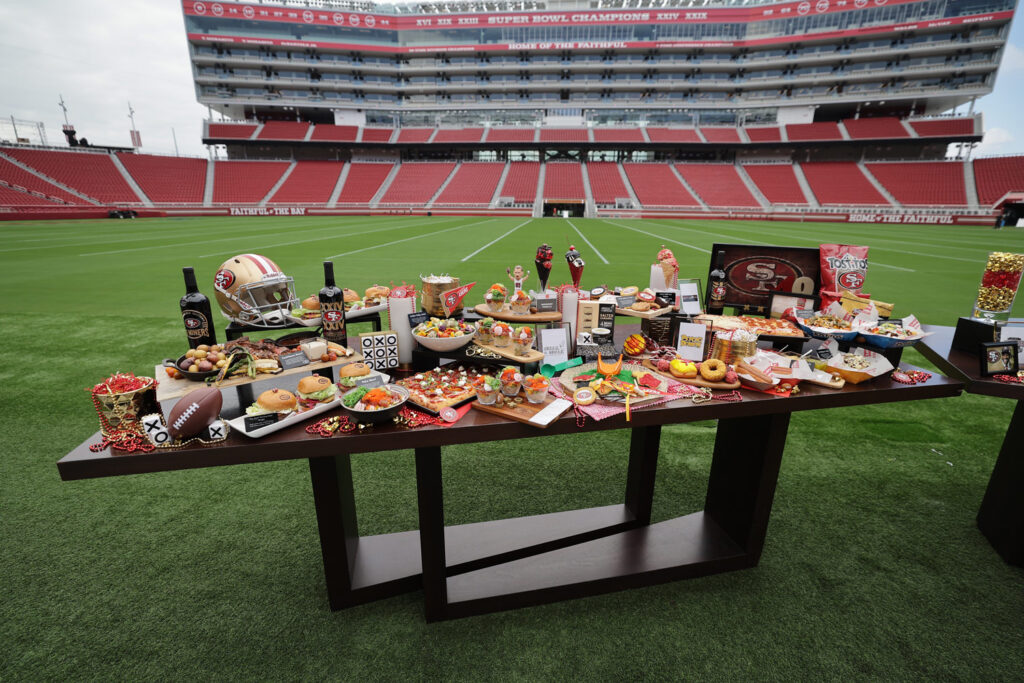