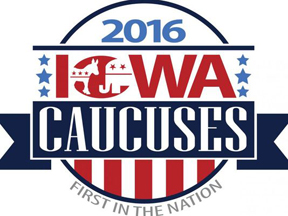 This report regarding Iowa Caucus outcomes of Monday, February 2. 2016,  is based on information received via Public Broadcasting System, FM 88.5. PBS is a public service radio which is non-partisan, factual and objective.

Hillary Clinton: 49.9%; Bernie Sanders: 49.7%; Total votes reported: 99%. While Hillary Clinton declared herself ‘THE WINNER’ some 1.5 hours before final standing were announced, the facts are that this contest ended as a ‘tie’. The very minuscule margin of victory does give Hillary the license to declare in New Hampshire that “Clinton won the Democratic Iowa Caucus”. Martin O’Malley withdrew his presidential campaign efforts. Analysts noted that Hillary Clinton received the bulk of her support from Democratic voters over age 50; Bernie Sanders received his support from the Democratic millenials (the younger Democratic voters). Several Democratic Caucuses were ‘tied” resulting in a flip of a coin to decide ‘who won’…Sanders may contest outcome, but chances are that in the next primary (New Hampshire), a neighbor of Vermont, Bernie Sanders has a ‘home-boy’ advantage.

The unexpected happened: Despite a lead is all polls up to February 1st, Donald Trump came in second; two Latinos of Cuban heritage came in first and third. The difference between ‘second’ and ‘third’ was only 1.2% (essentially a tie). Jebb Bush spent more than $10 million (PAC support) revealing that dark money may purchase many ‘attack the opponent ads’ but does not necessarily ‘buy the election’. Also, it may be that ordinary Iowan voters do not want to extend the Bush family political dynasty.

The next Primary is at New Hampshire on February 9th. And so this most unusual and interesting campaign for the Presidency of the United States of America will continue then.∆