30-Year-Anniversary of L.A. Uprising: What Has Changed? 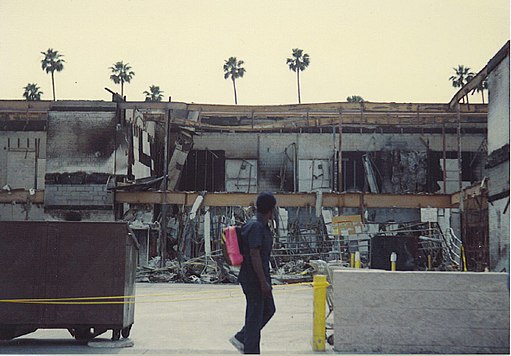 Thousands of buildings burned down during the Los Angeles uprising of 1992, prompting community groups to lead a multiracial effort to rebuild. Photo Credit: Mick Taylor / Wikimedia Commons
by ElObservador 05/06/2022

Thirty years ago, in the wealthy Southern California city of Simi Valley, a majority-White jury acquitted four Los Angeles police officers of all charges in the videotaped assault of a Black man named Rodney King. The acquittals sparked five days of violence that came to be known as the “1992 L.A. Uprising” (some preferred the term “riots,” others “rebellion,” or even “civil unrest“) during which an estimated 63 people were killed, at least 16 of them Black, 14 Latino, and the rest White, Asian, or unidentified by race. More than 2,000 people were injured.

Thousands of buildings were burned down, and more than $1 billion worth of property was damaged. A massive multitiered army consisting of tens of thousands of local, state, and federal law enforcement agents, including from the U.S. Border Patrol, was mobilized to end the rebellion and arrest more than 16,000 people.

It was a stunning chapter in Los Angeles and United States history, one that continues to mark local decision-making around issues of race, policing, inequality, community investment, gentrification, and political representation.

In the months that followed, political commentators on the Right increasingly linked the uprising to a “poverty of values,” to quote then-Vice President Dan Quayle. President George H. W. Bush asserted that the actions during the uprising were “purely criminal.” Such logic framed the official city, state, and federal government pledges to investigate the causes of the uprising and provide restitution-pledges that either remained unfulfilled or exacerbated existing problems.

Most of the progressive changes in L.A. since 1992 have instead been led by grassroots organizers and community members who have rooted their work in cross-racial solidarity, finding common cause in the abolition of incarceration and police, tackling the housing crisis, uplifting arts and culture, and encouraging civic engagement.

After the Uprising: How Authorities Failed South L.A.

Leslie Cooper Johnson, vice president of organizational development at Community Coalition, explains that her South L.A.-based organization was founded just two years before the uprising. One of its first campaigns was to tackle the heavy concentration of liquor stores, which local residents identified as a major source of crime and other social problems.

“As we were engaging in the campaign … the civil unrest happened and hundreds of liquor stores were burned down,” says Johnson. “And so the campaign then shifted to rebuild South L.A. without liquor stores,” she adds.

Former Mayor Jim Hahn remembers South L.A. being the site of “1,100 liquor stores down there, which I think was more than the entire state of Pennsylvania had.”

Although the organization’s leadership was eventually diversified in response to complaints, it never managed to accomplish what Bradley set out to do, either in rebuilding what was destroyed, or in changing police-community relations.

According to an in-depth analysis by Melissa Chadburn writing for Curbed Los Angeles, “The board operated on the assumption that the neighborhoods and its residents were insolvent, inefficient, lazy, corrupt thieves, and that an overreliance on public subsidies had run them into the ground.”

Johnson says, “There are still to this day lots in South L.A. that were made vacant during the civil unrest. … And we still haven’t seen the investment, or the development in those spaces.”

As to the fundamental issue of police violence, she adds, “We haven’t been able to move the needle as much as we would like to.”

A Backdrop of Inter-Community Tensions

King’s beating ignited a fiery debate about police brutality and race in the early 1990s in the city. Communities of color, especially Black residents, had long charged that police brutality was commonplace, but city officials ignored them. The nearly all-White jury that eventually acquitted King’s assailants believed the victim had resisted arrest and that the police had acted reasonably to subdue him.

“What prompted the unrest was just anti-Blackness, to be frank,” says Johnson.

Less than two weeks after King was beaten and a year before the uprising, Soon Ja Du, the Korean American owner of Empire Liquor in South L.A., shot and killed a young Black teenager named Latasha Harlins, who Du believed was stealing orange juice. Although convicted of voluntary manslaughter, Du did not serve a prison sentence for the shooting, and anger over the incident simmered within South L.A.’s Black community, where convenience and liquor stores were largely owned and operated by Korean Americans.

When jurors in Simi Valley acquitted King’s assailants, hundreds of protesters gathered in the San Fernando Valley, near the site where the assault took place, and marched to the local divisional headquarters of the Los Angeles Police Department.

In South L.A., anger spilled out into the streets centered on the corner of Florence and Normandie, an intersection that is now considered “ground zero” of an uprising that went on to spill into neighboring areas. There was a collective rage at the injustice of the acquittals, exacerbated by Black-Korean tensions. Residents set fires, demolished liquor stores, and beat those perceived as outsiders.

Korean American immigrants, many of whom in the early 1990s were relatively recent arrivals to the U.S. and L.A., were deeply impacted by the uprising: 40% of economic losses during the five days of violence were borne by Korean American businesses, according to Edward Chang, a professor of ethnic studies and founding director of the Young Oak Kim Center for Korean American Studies at the University of California, Riverside.

The date was such a momentous incident for the Korean American community that it is still referred to as “Sai-i-gu,” which means April 29 in Korean, “just like 9/11,” says Chang. He calls it a “watershed event,” and “one of the most important historical events for more than 100 years of Korean immigration history.”

“They had to leave, they had no choice,” says Chang of South L.A.’s Korean American store owners. “Many of them decided to relocate to other cities, such as Las Vegas, Seattle, or even Atlanta.” Others who decided to stay restarted their businesses as stores in indoor swap meets.

Although there has been less attention paid to the role of Latinos, Chicanos, and Latin American immigrants, the uprising directly affected them as well. Latinos were among the victims of violence, in addition to comprising 51% of those charged with crimes. Many Latinos also lost businesses in the uprising.

Eunisses Hernandez was only 2 years old when the uprising happened, and in adulthood, she went on to become the co-founder of La Defensa, an abolitionist organization tackling mass incarceration in L.A. To Hernandez, the horror of the ’92 uprising highlighted systemic social problems in the city that persist even today, and that are “a constant reminder that not many things have changed,” she says.

“We have taken some steps toward progress,” Hernandez says, “but the systems that have harmed us-law enforcement, special interest groups, corporations-have continuously beat all the efforts that we have made.”

“Paying more people to have guns and badges in our communities doesn’t make us safe,” she says.

In addition to her work with JusticeLA, which helped to push for the closure of the Los Angeles County Men’s Central Jail and to stop the expansion of new jails, Hernandez was co-chair of Measure J, a countywide ballot measure passed by voters in November 2020 to divert funding from incarceration into a “care-first-jails-last” approach to social problems.

Activists have identified community-based needs on which the county can spend money freed from the building of jails. Hernandez explains that the ballot measure stipulates moving “10% of locally generated tax dollars into two buckets: community investment, such as youth, minority-owned businesses, and housing, and the second bucket, which is alternatives to incarceration.”

Johnson’s organization has a similar approach. “We want to see investment in prevention,” she says. Today, Community Coalition is working on a campaign with other organizations to explore alternatives to armed police enforcement of traffic stops. What should be a routine interaction often starts with racial profiling of Black and Brown motorists and, far too often, results in violence and even death. But the city’s transportation department has been accused both by activists and the City Council of dragging its feet on completing a promised study as a first step toward implementing alternatives to policing in traffic stops.

In the meantime, Community Coalition is building a Center for Community Organizing that, in Johnson’s words, will help “train up more organizers from across the country to be well-versed in the strategies and methods that have proven to be successful.”

Johnson’s definition of rebuilding her city includes expanding access to arts and culture for low-income communities of color. Community Coalition’s “cultural organizing” is based on the premise that “art is power.” Musical concerts and art exhibits provide opportunities to engage local communities in progressive causes and to encourage civic duties, like registering to vote. Moreover, she explains, “Black and Brown people … are interested in changing the community around them and the outcomes for their families. We also want joy. We appreciate beauty.”

“What does a human being need to thrive and to be happy?” Johnson asks. The answer to that-public safety, affordable housing, living wages, health care, arts and culture-is what she and other local activists are demanding for their community. “It’s not so radical, it’s not so different than what anyone else would want for their family.”

Solidarity Between Communities of Color

While Hernandez sees little progress by city authorities to rebuild South L.A. since 1992, she says, “We have grown in certain areas, like around solidarity between Black, Brown, and Indigenous people of color and other low-income communities.” Hernandez, who is running for a seat on the L.A. City Council, cites the strong multiracial coalitions she works with as integral to making progress on such issues as transitioning L.A. County and L.A. away from a carceral system.

Another example of solidarity between racial groups was the evolution of KIWA, a grassroots organization that was launched two months before the uprising as Korean Immigrant Workers Advocates, and years later renamed itself the Koreatown Immigrant Workers Alliance. The organization’s new name reflected the growing evolution of an area where Korean Americans had traditionally lived into one that has become increasingly populated by Latinos and other immigrant groups.

According to Chang, Asian Americans have been part of this cross-racial solidarity. “There is a conscious decision made, particularly by the 1.5 and second-generation organizations, that are trying to reach out to other communities,” he says, calling younger Korean Americans the “children of Sai-i-gu.”

Alongside KIWA, Chang cites Koreatown Youth and Community Center, an organization founded in 1975 to serve primarily new Korean immigrants, as another example of a Korean American-led community group that pivoted to multicultural organizing. According to its website, “After the L.A. civil unrest in 1992, KYCC expanded from being an ethnically focused agency to one that included the surrounding community, aligning with its evolving needs.” Another local grassroots group, Korean Resource Center, has similarly evolved, and, according to Chang, its main activities now are centered around “building coalitions with African American and Latino communities.”

The Black Lives Matter protests of 2020 were a stunning display of cross-racial solidarity in L.A., where young people of color, starkly aware of ongoing systemic racism, marched together against racist police brutality.

“In 1992, South L.A., Koreatown burned down,” says Chang. “But in 2020, they made a conscious choice to protest in Beverly Hills, Santa Monica, and West Hollywood, White affluent neighborhoods.” Chang sees that decision as “a signal that racism is part of White America, and White America needs to take ownership and participate in eradicating racism.”

Johnson agrees, saying, “The only way that we’re going to achieve what we want is together.”

California counted its homeless population, but can it track the money?