MARVEL STUDIOS’ VICTORIA ALONSO TAKES US INTO THE MULTIVERSE OF MADNESS 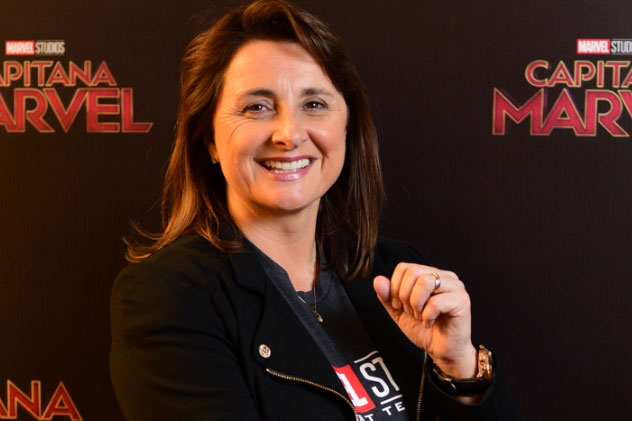 Victoria Alonso is the President of Physical, Postproduction, Visual Effects, and Animation for Marvel Studios. Her work within the film industry spans back to the year 2000, where she first started working in visual effects production. Since joining Marvel Studios in 2005, she has been behind nearly all of the 30+ Marvel films and now is working on the Marvel series on Disney+ as well.

She has been honored for her talents and perspective in the film industry most recently with the Visionary Award at the 2021 Outfest Legacy Awards and was named one of People en Español Magazine’s top “Poderosa” Most Influential Hispanic Women in 2019 and 2020.

Alonso recently spoke with us about Marvel Studios’ newest film, “Doctor Strange in the Multiverse of Madness” as well as its newest Disney+ series, “Moon Knight”.

She also talked to us about her experience of being a Latina Executive in Hollywood, and why she believes that films and television should be as diverse in its writing rooms as it has been happening in front of the camera.

“Doctor Strange in the Multiverse of Madness” features Benedict Cumberbatch as mystical hero Dr. Stephen Strange, who is joined by Elizabeth Olsen’s Wanda Maximoff/Scarlet Witch to travel into the uncharted multiverse while a mysterious new nemesis looms.

The film is poised to make headlines with the introduction of actress Xochitl Gomez as America Chavez, a comic character who is making their first appearance in a Marvel Studios film. Just like in the comics, America Chavez will be a gay character. Another noteworthy fact is that She will also be joining the handful of Latino actors that have jumped into the role of a Marvel Comics superhero, following in the footsteps of Zoey Saldana, Oscar Isaac and Salma Hayek.

“Moon Knight” is now on Disney+, while “Doctor Strange in the Multiverse of Madness” arrives to theaters May 6.

To start off, I wanted to know, as an executive producer, what was the overall goal for “Doctor Strange in the Multiverse of Madness” in the sense of what you wanted the story to convey, and how would it connect back to the larger stories of the Marvel Studios universe?

As a leader in the visual and physical production at Marvel Studios, how would you describe the visual aspects of this move? Is it larger than anything before in the MCU?

I don’t know when people say larger, they think that it’s really about size and volume, but our movies in general are pretty big movies, so it’s in line with our movies and size, but it does take you to a different depth of the multiverse and because it is a place where you can actually start looking at different lenses of this madness and different angles. So that’s creative just in images, you can just look at very different perspectives and how to tell the story from that point of view.

So it was a challenge because we wanted to do it properly, and it’s a chance to see Dr. Strange in a very different light, in very different situations. So hopefully when it comes out in May, people will get a chance to look at it and let us know if we’ve done our thing.

As a Latina in such a distinguished role, what are your thoughts on the ongoing pursuit of Studios like Marvel to diversify the silver screen and bring in these new diverse voices and characters from different places and colors?

Well, I’ve been a part of diversity and inclusion when it wasn’t really the PC thing to do, so it’s been my banner through and through. And I think that it’s really important that every studio, not just Disney, but every studio in Hollywood, take this on to make sure that we have every group of people represented not only on screen, but off the screen.

I think the more that we have people off the screen being a part of the conversation of the storytelling and the writing of the scripts and the crafting of the stories, then I think we’ll have richer stories. Not necessarily that we didn’t have rich stories before, but to be able to see it from a different point of view, from a different perspective, I think it’s very important, and I think it’s almost like a duty for us to be able to allow every kid to see themselves represented.

Thank you. The reason I asked that question is because in “Doctor Strange in the Multiverse of Madness” we have Xochitl Gomez, who will play America Chavez, a Marvel hero who’s on the screen for the first time. What can you say about her inclusion?

I can say that America Chavez is one character that I’ve been waiting to see come to life since we started the studio in 2006 with the beginning of Ironman #1. So for me, it’s been a long journey. I have been as anxious to see her come to life as anybody. And I think Xochitl Gomez did an absolutely marvelous job in bringing her to life. The character of the comic gave us such a good entrance. And then now we get to see her be a part of the MCU. It’s an honor to have her, it’s a dream come true for me. To see the character come to life, and hopefully we’ll get to see more of her.

Thank you. And are there any highlights that you’re excited to share with audiences before they go see “Doctor Strange in the Multiverse of Madness”?

There’s another project that you worked on that I wanted to ask about, “Moon Knight”, and it’s about another lesser-known Marvel character with a complex story. Could you talk about what people can expect from “Moon Knight”?

Well, one of the things that Disney+ and the fact that we’re doing streaming now is that it’s allowing us to have characters, new characters, and some characters that you’ve known, like Loki, Wanda, Falcon, and Hawkeye that you knew before, but now you could see a different chapter of their lives.

But with Moon Knight, there’s the origin story [and] the introduction of this brand-new character, and it’s a character that we’ve taken from the comics with Dissociative Identity Disorder, and then we are talking about mental health and having a chance to dive into that and to maybe open the conversation about mental health and how important it is to not hide from it. That is something that we can have a dialogue about.

And finally, is there anything else that you’d like audiences to know about either “Doctor Strange” or “Moon Knight”?

I think that both are very different and both show the amazing amount of diverse stories that we are about to tell in the next few years. We started shooting our 31st film a while back and we are on our, I don’t know what show number that we’re working on, but I think it’s in the double digits, so the amount of work that is coming is pretty amazing, but all of it is quite different. I think that audiences will get a chance to see very different colors in the banner of the MCU.