In familiar refrain, United Farm Workers grapples with how to grow 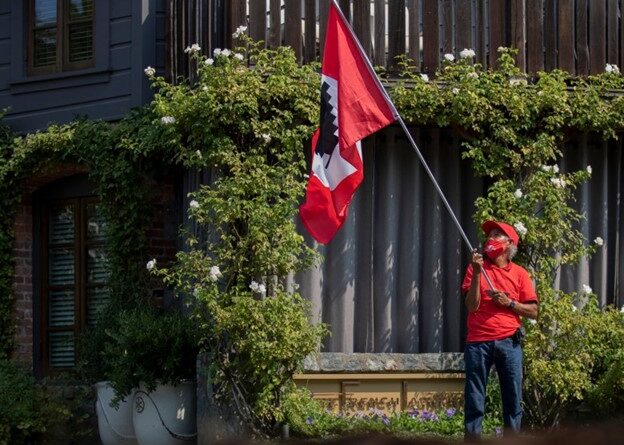 A demonstrator waves a UFW flag outside The French Laundry during a march from the renowned restaurant to Gov. Gavin Newsom’s winery, Plumpjack, in response to the governor’s veto of AB 616 on Sept. 25, 2021 in Yountville, CA. Photo Credit: Rahul Lal / CalMatters
by ElObservador 01/28/2022

The union found a lawmaker from a coastal agricultural district willing to carry a bill that would allow California farmworkers to vote for a union by mail, instead of in-person secret ballot elections conducted on a grower’s property. UFW political strategists sensed an opportunity, and Democrats, who control the Legislature, approved it.

But with the stroke of his veto pen, Gov. Gavin Newsom ended the UFW’s latest push for more union victories. The governor’s message cited “various inconsistencies” and “procedural issues,” and offered to look for opportunities to reform the state’s agricultural relations board, which mediates labor disputes. UFW officials said they asked to meet with Newsom for four months leading up to his veto.

They never heard back.

Until recently, the union has been able to advance its political agenda, passing overtime pay and other protections, despite persistently low membership. But in a sign of UFW’s struggle to advance its political agenda and grow its ranks, the organization founded by Cesar Chavez, Dolores Huerta and other heroes of America’s farmworkers movement could not get a direct meeting with the governor, only his staff.

The union and its supporters say more collective bargaining is needed to blunt rising inequality by increasing wages for some of the lowest-paid workers in the country. But the union has never gained a foothold in the industry. In fact, membership is so low that UC Merced researchers say farmworker union membership is now statistically zero. Today, UFW focuses its efforts on political advocacy, hoping for better election outcomes by making accommodations such as at-home voting. Even if the measure passes, it’s unclear whether that will lead to more members.

Research shows that unions generally provide low-wage workers the opportunity for better wages and access to benefits through collective bargaining. Latino men and women, who make up most of California’s agricultural workforce, saw their weekly earnings increase higher than other groups when they worked at a unionized workplace.

The Bureau of Labor Statistics doesn’t have data on unionized versus non-unionized agriculture wages because the sample size to produce data is too small. What research exists is decades old. Martin, professor emeritus of agricultural and resource economics at UC Davis, found in 1986 that agricultural union wages generally rose faster than all farm wages, suggesting that organized labor victories were important for wage gains on California farms.

At the same time, unions raise costs for the growers. A 2020 report by the left-leaning Economic Policy Institute found that a 40% pay raise for farmworkers would cost $25 per consumer household. And growers consistently cite labor costs as a key challenge.

What is known is that farmworkers’ wages haven’t kept up with other workers.

The farmworker’s principal union says it can help reduce that gap but membership has always been a challenge.

The UFW was founded in 1962 as the National Farm Workers Association and carried out a series of strikes and boycotts, primarily in the grape and lettuce industries.” In 1975, at the height of the UFW’s activism, then-Gov. Jerry Brown signed California’s Agricultural Labor Relations Act, which established farmworkers’ right to collective bargaining. It was a first in U.S. history, and inspired other states to allow farmworkers the right to organize.

Despite a strong start, UFW’s footprint was always limited: Even at its height in the 1970s, the union oversaw about 150 contracts and had approximately 80,000 members, mostly in California, Texas, Arizona and Florida. The union represented just a fraction of an estimated 3.3 million farmworkers in America at that time — or roughly 2% at a time when workforce participation in unions was much higher.

UFW has struggled to retain members since.

As of August 2021, the union had about 33 contracts covering year-round workers who plant and harvest long-season vegetables such as berries, leafy vegetables and vineyard grapes. The state Agricultural Labor Relations Board might oversee just one or two union elections each year. And in recent years, two facilities in California organized by the UFW voted for decertification, essentially firing the union.

It’s difficult to get an accurate count of UFW members in California, but census data shows membership remains persistently low.

The U.S. Department of Labor logged the UFW as having 6,626 active and retired members across a handful of states, but the union declined to provide a state-by-state breakdown. There are an estimated 400,000 farmworkers in California.

Researchers at UC Merced, meanwhile, tell CalMatters and The Fresno Bee that based on a 2020 national employment survey, the percentage of California farmworkers who belong to a union is statistically zero, meaning there are so few active members they fall within the margin of error.

UFW spokesperson Elizabeth Strater countered that critics have been speculating the demise of the union for decades. She said the number of organized workers in the industry is not a fair metric to judge the union’s success – that the UFW is not failing at its mission of organizing California’s farmworkers, despite its infinitesimal membership numbers.

Membership loss, though, has hurt UFW financially. Though it charges 3% of wages in dues, it receives significant outside support from donations. Its pension plan is in financial distress and the state has even bailed out the union’s health care plan.

Former union members recall the benefits of a contract negotiated by UFW.

He then got a job at a local, nonunionized berry farm. The job change priced him out of the company health plan: The option offered by the company is too expensive, so he is now on the state health exchange plan.

UFW describes itself as somewhere between a labor union and a movement by focusing on where it can make the biggest impact on farmworkers. In recent years, the union won legislation on increased pesticide protections, overtime pay and heat protection for farmworkers. It successfully pushed through sexual harrassment training and protections on fields and orchards.

“When we have a level playing field,” Strater said, “there will be more ways that we can organize, including into collective bargaining agreements.”

At the federal level, the union continues to push for immigration reform, a change supported by some growers to address a shortage of workers. But Martin said immigration status should no longer be an excuse for the union’s inability to organize more workers.

Perhaps one of the biggest challenges to organizing is the structure of the industry itself.

Currently, most farmworkers are employed by companies that contract with growers, known as farm labor contractors. It’s a trend in outsourcing that started in the 1980s when small farms started dying off and the industry saw increased consolidation. But UFW has a harder time organizing these types of farmworkers who move from field to field. The Agricultural Labor Relations Act stipulates that farm labor contractors are not employers and thus are not recognized for collective bargaining purposes under state law. Workers have to petition by worksite instead.

While worker advocates say farm labor contractors can more easily commit wage theft, some farmworkers appreciate the model because it offers them flexibility and variety.

Margarita Amador, 47, works seasonally under a farm labor contractor, which allows her to work the summer harvests in Washington. She said she can easily take unpaid time off to take care of doctor’s appointments, school events and anything else that arises.

“Yo como soy mujer y soy a cargo de la casa de la familia, de los niños, para mí este trabajo es lo mejor,” said Amador, noting that as a woman in charge of the house, her family, and her kids, this type of work is the best.

While she thinks the UFW could help her get better wages if she had legal status and worked at a direct-hire farm job, she’s mixed about whether she would join.

What comes next for United Farm Workers union?

The UFW now looks for its next opportunity to expand union elections for farmworkers.

After Newsom vetoed the bill that would have allowed farmworkers to vote to join a union from home, UFW responded with a headline-grabbing vigil and march from The French Laundry restaurant where Newsom had attended a private dinner maskless. UFW purchased a billboard along a freeway heading into Sacramento to blast the governor for failing to stand up for farmworkers.

Supporters said farmworkers should be able to vote at home to avoid intimidation at the workplace. But critics, primarily business and grower groups, said such a change would make it easy to commit voter fraud, primarily because the cards could be pre-filled by unions.

“There’s nobody organizing the farmworkers, that’s fact number one,” said William Gould, who has served on state and federal labor relations boards. “Even if this bill is reintroduced, I doubt that that’s going to change appreciably.

“While the governor’s office does not typically comment on potential legislation, the administration looks forward to continuing California’s vital work to improve working conditions and opportunities for farmworkers across our state,” according to Newsom’s spokesperson Amelia Matier.

A legislative source said Assemblymember Mark Stone is working to bring back similar legislation this year.