Q&A: Behind the “Black Widow” 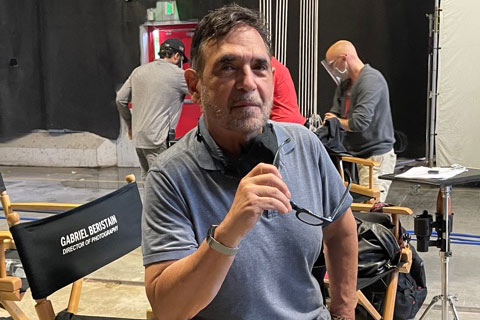 Gabriel Beristain is a Mexican cinematographer who is the Director of Photography for Marvel’s “Black Widow” and helped create the visual look of the film. Photo Credit: Gabriel Beristain
by ElObservador 07/16/2021

“Black Widow” continues the story of one of the most captivating and wholly human superheroes in the Marvel Cinematic Universe. In this newest comic turned action-adventure film, Scarlett Johansson shines as she returns as Natasha Romanoff/Black Widow, needing to deal with her murky past once and for all.

Although this adventure takes place right after the events of “Captain America: Civil War” and before the last Avengers film, this film is actually the first to kickoff Phase 4 of the Marvel Cinematic Universe (MCU), essentially leaving behind what happened with “Avengers: Endgame” and refreshing us for a new world with different stakes.

Along the adventure to close the haunting chapter of her past as a morally dubious spy, Romanoff is joined by past colleagues, who are also an unconventional family unit, composed of Yelena (Florence Pugh), Alexei/The Red Guardian (David Harbour), and Melina (Rachel Weisz). This “family unit” is tasked with bringing down an old enemy that threatens the future of the world Romanoff has fought to preserve the last eleven years on screen.

Recently I had the opportunity to chat with Gabriel Beristain, a Mexican cinematographer who worked as the Director of Photography (DP) for “Black Widow” and has had a history of working on films within the Marvel Cinematic Universe, and well as some from outside it.

From working on the Marvel Comics character of Blade as Director of Photography alongside Guillermo del Toro in “Blade II” and later “Blade: Trinity”, to working on the first MCU film “Iron Man”, Beristain has managed to help give these larger-than-life stories a look that exemplifies the spectacle but also relies on catching the quieter moments and the more grounded interactions. According to him, it makes for a much more “human” blockbuster.

With “Black Widow” Beristain took the reins of main cinematographer duties and as the DP, had the opportunity to craft the look of the film itself alongside Director Cate Shortland.

In the following interview Beristain brings to us the perspective of a cinematographer by giving insight into what happens in the background of shooting one of the biggest blockbusters of the year, and how he tries to use, “emotions to lead the film, not spectacle.”

To start off, could you talk a little bit about what the visual identity and the visual language of “Black Widow” is and how you and your team landed on that look?

Well, the Marvel Universe has a language that has been very clear, and people really enjoy it. However, “Black Widow” is like the character itself. Black Widow is the most human of all the superheroes. She doesn’t have supernatural powers. She’s really the product of training and suffering as character. So that makes her very, very special as a superhero and also Scarlett is a very wonderful actress. So, with those elements there on that character, what we are trying to do is we are trying to create a language slightly different of the language of most Marvel films without sacrificing the spectacle, on the contrary.

So, the big difference here is that we are mainly using the emotions to lead the film, not the spectacle. The spectacle is there, and it’s wonderful – people will go to the cinema and say, “what an incredible piece of visual effects, of fights,” it’s absolutely fantastic, truly, spectacular. But within that spectacularity you will also have the emotions of the character, so the photography and the style of this film, that’s why it’s slightly different, in response to that reality. We are dealing with a very powerful emotional film, within the great spectacle of Marvel.

And as you mentioned, there already exists a framework for the visual style of the Marvel Cinematic Universe, and you’ve worked on other films within it before. With that in mind, what is the experience of now being the Director of Photography on “Black Widow” and those other responsibilities that come with having a larger authority on what happens with the films look overall?

Before I was doing additional photography in that modality that Marvel discovered once they became a studio. Because I did Marvel films before, I did the “Blade” films, but they were not part of the Marvel Studio Universe. So now that Marvel discovered that when they finished the film [and] presented to groups of people to gather information on what that audience wanted to get and more than that, I call it part of “the collective dream”, the collective dream that Marvel wanted to see in order to decide what to do, what they need to see and feel.

And that’s the reason why Marvel films are very powerful. Because they speak to the collective dream. So, what I did is I tried to, yes, respect the style created by the director and the director of photography that did the first film [Iron Man], but when we went to do additional photography, that additional photography was responding to the needs of an audience that they had been presenting the film to, meaning the collective dream.

So, my photography, even though had to respect that technical stuff and perhaps artistic, has to also create a language that was going to match those respective expectations from the audience. So, I have to be very, very respectful and at the same time very innovative. So, when I had the opportunity to create my own style, it was very interesting.

And I hope I’m creating something that is not betraying the Marvel Universe, but that is evolving the Marvel universe and bringing something else to that, not only the spectacle, but also to work with the emotions of the character and create that visual universe in the same way that the comics used to do it.

When you used to open a comic and see a very powerful image it spoke more than a thousand words.

Could you speak on how you worked with the Director Cate Shortland, to find the right balance and tone of the human moments and the more fantastic elements for “Black Widow”?

What the most important thing was trust. Jokingly I said, “I’m the hand of the queen, I protect the queen.” And not that you needed to be protected. But the Marvel universe is powerful. I mean, the visual effects are very, very strong. And the stunts were very important and the fight arrangements and the choreography and the different units and the second unit and aerial unit and all those units.

But what Kate and I hoped very often was, “let’s make sure that nothing of that is going to be more powerful than our story.” So those where the conversations that Kate and I constantly had and that was the trust because at the beginning, Kate was very cagey, “I’m not sure whether this man is a Marvel guy. I mean, he’s been working with Marvel for so many films, surely he’s a Marvel guy.”

When Kate trusted that was going to happen, we both marched together hand by hand, actually making sure that the emotions of the story that she wanted to tell were always leading the spectacle. Not diminishing the spectacle, on the contrary, that’s why the spectacle is so important there. But it’s there in the service of the emotions, it’s not only a beautiful, powerful visual effects image, it has a function that serves the story. And that’s what makes the film very special.

Thanks so much Gabriel. Now for my last question, could speak on any memorable or favorite scene that you set up for this film?

Well, I think the most important thing for me, as I said, when you see the film, you see that there are scenes that are incredible. The rescue of David Harbour from the prison in Siberia is a phenomenal, spectacular scene. And the last scene is a spectacular scene, absolutely.

But perhaps the most beautiful moment there is when you have two phenomenal actresses, Scarlett Johansson and Florence Pugh, sitting in a little coffee shop in Budapest and talking face to face, heart to heart, the two sisters talking to each other.

That moment of this phenomenal performance, phenomenal, powerful character dialogue, is what makes the film so valuable because you know that this extraordinary little scene, not only is that a master class in performance that really reaches the emotions of the audience and will make you think. Also, what it will do is it will perfectly match the full spectacle of the film. And that is really what’s the most interesting thing for me that I have done in “Black Widow”.

“Black Widow” is now in theaters and on Disney+ with Premier Access.