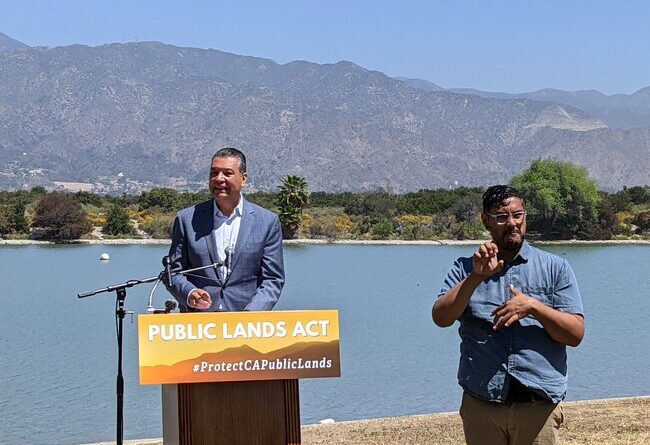 Sen. Alex Padilla, D-Calif., speaks at an event announcing the PUBLIC Lands Act at the Santa Fe Dam Recreation Area in Irwindale, in the foothills of the San Gabriel Mountains. Photo Credit: Bryan Matsumoto / Nature for All
by ElObservador 05/07/2021

SAN GABRIEL MOUNTAINS, Calif. — More than a million acres of public land and 500 miles of rivers in the Golden State would get new wilderness protections under a package of bills just introduced by Sen. Alex Padilla, D-Calif., and Dianne Feinstein, D-Calif.

The Protecting Unique and Beautiful Landscapes by Investing in California (PUBLIC) Lands Act covers the San Gabriel Mountains and big sections of the central coast and northwest California.

Katie Hawkins, California program manager for the nonprofit Outdoor Alliance, said the plan is great news for people who like to relax in the great outdoors.

“Protecting California’s lands and waters will improve recreation access to these incredible landscapes, support local economies and will advance the state’s goals in conserving 30% of the lands and waters by 2030,” Hawkins outlined.

The U.S. House passed its version of this bill in February. Opponents claimed current protections are sufficient and complained the bill would limit logging, mining and fossil-fuel extraction.

Belen Bernal, executive director of Nature for All in San Gabriel, which supports the San Gabriel Mountains National Monument, said the bill will improve trails and make the area much more accessible to low-income families from the San Fernando Valley.

She noted it moved the ball forward on multiple fronts.

Among many other things, the bill would give official designation to 400 miles of the Condor National Scenic Trail in the Los Padres National Forest, and would add protections to the South Fork Trinity River.