Because of Zuckerberg’s Congressional testimony this week, tens of thousands of Facebook users call on him to implement a circuit breaker to stem the flow of hate and lies. 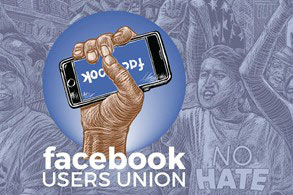 The Facebook Users Union has a message for him about what he should pledge to do to stem the flow of hate and lies: Facebook should create a circuit breaker to help prevent dangerous disinformation and incitements to violence from ever reaching a mass audience.

A simple circuit breaker could have stopped disinformation about the pandemic and about the 2020 elections from reaching millions of people.

“By the time millions of people have shared false information, it’s already too late,” said Charlie Wang, an activist with the Facebook Users Union. “If social media companies had used a circuit breaker when the Plandemic video went into circulation, they would have stopped the verifiably false information in the video from spreading to 8 million people before the video was taken down.”

Circuit breakers are used in stock exchanges when there’s a dramatic drop, to pause trading and allow traders to assimilate new information and make better-informed choices. Social media circuit breaking would work the same way, pausing the most high-volume posts for fact-checking before they reach millions of people. Learn more at https://facebookusers.org/2021/03/20/tell-facebook-flip-the-switch-on-hate-and-lies/.

The circuit breaker would automatically be flipped when a superspreading post is heading to tens of thousands of people’s newsfeeds at an unsafe speed. Some researchers have suggested a trigger for posts with 100,000 Facebook interactions in 12 hours, which would mean roughly the top 0.01 percent of Facebook posts from public pages within the period.

Others have suggested that Facebook implement a circuit breaker that would be flipped under any of the following circumstances:

·         A certain number of reports or complaints have been made about a post.

·         A certain number of pages with large audiences are pushing the post in a coordinated way.

·         A post is being amplified by pages that have previously been penalized by Facebook for spreading misinformation.

Only Facebook has real-time data about what the right trigger point would be to prevent lies and hate from reaching a mass audience.

Once the circuit breaker is triggered, the post would be “paused” until it’s reviewed by a human being. It would remain on the user’s profile page but not be eligible for amplification. The Working Group on Infodemics Policy Framework recommends that the circuit breaker would temporarily prevent the content from algorithmic amplification in newsfeeds, appearing in trending topics, or via other algorithmically aggregated and promoted avenues. Individual posting or message sharing could still occur. (See Working Group on Infodemics Policy Framework, page 80.)

Using a circuit breaker would restore free speech to the real meaning of the expression, which never included the right to viral or algorithmic amplification. It would allow superspreader social media posts to remain posted on an individual’s profile but would prevent them from being algorithmically amplified until they are fact checked by a human being.

“Facebook users deserve a platform that’s free from attacks on our elections, free from pandemic misinformation, and free from threats to our physical safety,” said Corey Hill, a board member with the human rights organization Global Exchange. “A circuit breaker on its own won’t eliminate all of the mis- and disinformation that Facebook has allowed to overwhelm its platform, but it’s a critical first step.”