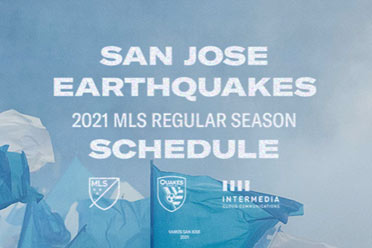 The full 34-game schedule runs from Friday, April 16 to Sunday, Nov. 7 and is evenly split between home and away matches. The Quakes will face 15 different opponents throughout the season, including each of the other 13 teams in the Western Conference, and D.C. United and Orlando City SC of the Eastern Conference.

Fan attendance for the beginning of the 2021 season will be limited to 20 percent in order to follow social distancing protocols set in place by local and state guidance.  While Santa Clara County has moved into the Orange Tier, which allows for 33 percent capacity, the capacity will still be limited to 20 percent to allow for appropriate social distancing.

Under current state guidance, the Quakes will have enough capacity at the 2021 California Clasico to accommodate all season ticket holders. Should tickets be available to the general public for any limited attendance matches, a general public on sale date will be announced.

To guarantee an opportunity to attend the first five matches at 20% capacity, fans can express their interest in season tickets  here.

After the aforementioned home-heavy start to the season, the Quakes will then play eight of their next 10 matches away from home. It marks the first time in club history that the team will endure eight road matches during a stretch of 10 regular season contests.

The Quakes will then play seven of their next 10 at Earthquakes Stadium between August 8 and September 29 before finishing with a balanced schedule that includes four road matches and three at home.

Several marquee matchups headline the 2021 season. The Earthquakes will be Austin FC’s first-ever opponent at the newly constructed Q2 Stadium on Saturday, June 19 (6 p.m. PT; UniMás). San Jose will then host the LA Galaxy at Stanford Stadium a week later on Saturday, June 26 (7 p.m. PT; UniMás) in the highly anticipated California Clasico. The Quakes will welcome 2019 MLS MVP Carlos Vela and LAFC on Saturday, Sept. 25 before Austin comes to San Jose for the first time ever on Wednesday, Oct. 20.

The full 2021 regular season schedule, minus local broadcast details, is below: