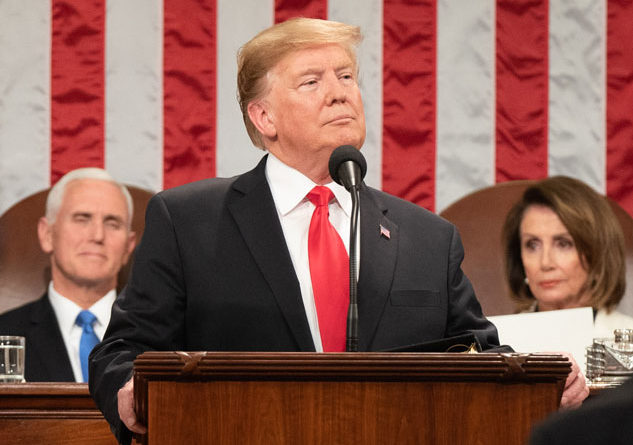 At 82 minutes, President Donald Trump's 2019 State of the Union address was long, but the record for the longest such address is held by President Bill Clinton. Photo Credit: The White House
by ElObservador 02/08/2019

The president spoke at length about unity, but then railed against illegal immigration and turned the spotlight on the family of an elderly couple from Reno. An undocumented immigrant has been charged with their deaths.

Kait Krolik, communications director for the group Battle Born Progress, called it “a brazen attempt to weaponize a family’s pain.”

“I felt that that was a fear-mongering attempt to splinter our community,” she said, “and his undying effort to build a racist and archaic wall isn’t the direction our country needs to go.”

Krolik said she had hoped to hear any policy prescriptions to address what she considers to be a larger crisis in America: the prevalence of gun violence.

Trump took credit for a booming economy and claimed that his tax cuts would increase the size and wealth of the middle class. Critics pointed out that the tax cut primarily has benefited the wealthy and that Republicans have proposed deep cuts in social programs to make up for the lost tax revenue.

Trump also asked Congress to vote for a bill to outlaw late-term abortion. Krolik took issue with the way he described the procedure, saying it was unnecessarily inflammatory.

“It’s just outrageous that he would discuss it as if they are ripping babies from bodies and that it is a willing, happy choice,” she said. “Those are really tough decisions by families, and those lies are just making it harder and dangerous for women whose lives are at risk from their pregnancies.”

She did praise the president’s proposal to encourage more transparency in drug pricing, but said she thinks more direct intervention to prevent price gouging may be necessary.

How to Help Protect Yourself from Tax Identity Theft