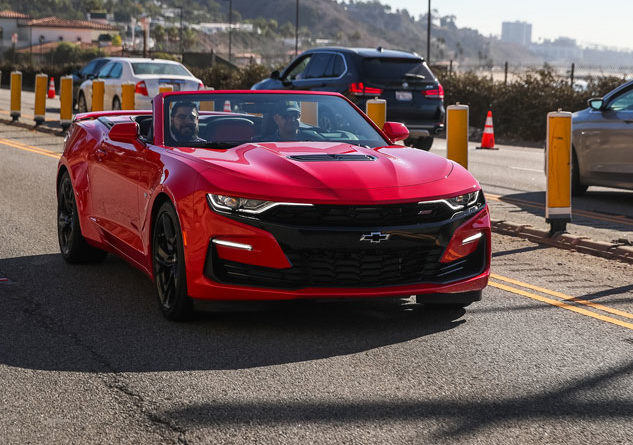 With the coast to our left, and canyons to our right, we take the 2019 Camaro SS cruising up the Pacific Coast Highway

Editor’s Note: The following event took place a week before the devastating Woolsey Fires in Southern California which began on November 8, 2018. This writing chronicles a trip through the natural wonders of the coastline and surrounding region prior to this natural disaster.

A few months ago, November to be exact, I had the opportunity to head to Sunny Santa Monica, California to test out Chevrolet’s new Camaro SS on a tour through the Pacific Coast Highway and into the canyons adjacent to the coast. It was just as the fall was settling in Southern California, meaning warm days and slightly cool nights.

Flying down to LA from the Bay Area is a pretty easy task, and as I left Halloween night to my destination in Santa Monica, a mere 20 minutes away from Los Angeles, I was excited for what the next day would bring. “Vroom” is a term that I would definitely say traveled my thoughts leading up to this media event, where fellow writers and car enthusiasts would take a day to roam the coast of Southern California and venture into the gritty but scenic canyons that lay in between us and our destination of Westlake Village.

During our trip we had the opportunity to hear from Al Oppenheiser, Camaro’s Chief Engineer on what exactly makes this iteration of Camaro tick. One of the big takeaways was that alongside its new tech in every trim level, the 2019 Camaro has offers one of the best entry level sports cars on the market based on features and cost.

Our morning began with a presentation from Chevrolet and its lead Camaro Engineer, Al Oppenheiser. Not only is Oppenheiser the man behind the Camaro brand, he is also a die-hard fan of the car, so it’s not so much a job as it is “the job” for him, a daily immersion in his favorite things.

Oppenheiser gave us a primer on what was new this year for Camaro and highlighted some of the key projects that went into this year’s lineup: drive customization, fan appreciation, and price.

As we left the meeting room in the Viceroy Hotel, we stepped out into the balmy 81-degree weather to a delightful sight: in the driveway sat a couple of gleaming, 2019 Camaro SS, ready for us to take onto the streets.

It’s such a “California” ideal to be able to take a bright colored American muscle car into the long winding roads hugging the Pacific Ocean with the convertible top down. Overall, it’s a part of Americana, the historic iconography of “being American” in some ways. Just like those images of old west cowboys, 50’s diners and of course, the Camaro hitting any highway in this country – they instill these experiences and dreams of freedom and adventure, in vast, wonderful landscapes.

The Camaro’s history is drawn from this and has become part of this iconography as well. So, on this day in Santa Monica, we’d be partaking in this, our own Americana moment, ourselves. To be fair, although I am born and raised in this golden state, these opportunities are just as exciting to me because it does let me live in this world of fast (but legal speed limit) cars, beautiful scenery, and a sense of enthrallment.

It just so happens that we would be partnered up for this trip, and 50 miles would be driven by the first driver, and 50 back from our lunch destination, Boccaccio’s Restaurant, in Westlake Village. To get there we’d leave the edge of the West coast and venture into the canyons that lay to the East of PCH.

Since I was new to driving through the PCH and the canyons, my very courteous driving buddy allowed me to take the drive back in our Camaro SS, after I had a sense of the roads. And the color for our day drive couldn’t be more perfect, RED HOT. The new lines and shape of the Camaro are great to look at, and I had the opportunity through the drive to see fellow Camaros drive alongside me. Knowing what the car looked like as it sped alongside us was neat.

Controlling the car was a breeze, and with a new paddle system, borrowed in part from technology Porsche uses, allows the automatic 10-speed to be controlled with some manual tap modes as well. This lightning quick shifting done through the tap system allows for more precise track use.

One thing I noticed was that although it does have a lot of features meant for more seasoned car enthusiasts and track lovers, it does have a lot of automation and safety features which make it a vastly multifaceted sports car. Features like front collision alert (new to the Camaro) are easily customizable and can be turned off. As Oppenheiser puts it, “All this translates to smooth ride opportunities on the open road, at the grocery store, or on a track.”

The new LS model is what I would call, bang for the buck. Oppenheiser says about the new LS model, “We wanted to go after more people looking at us when they price shop on entry level price. It’s a bonafide LS, it’s not a stripped-down car, priced at $25,999, a great deal to get into the Camaro for those that love the styling.”

By using already existing parts for Camaro and not removing “customer facing” features, the car’s higher sticker price is really the only thing removed.

For this year’s model, they definitely wanted to compete and have the higher feature, lower price starting model than another, horse-named sports car. Oppenheimer says the Camaro team, “wanted to stay competitive with the features and pricing without skimping on the actual car, it’s features, and what’s most important, what lies under the hood.”

I will say that the smooth, tight vehicle allowed me to take curvy canyon turns and more exciting straightaways on the PCH than I thought my body and my brain, usually driving a sedan, could allow me to.

As the trip ended and I drove back towards downtown Santa Monica, with the sun lowering as I rode past the boardwalk and the beach, I ended the day thinking about what I thought was that “Americana” driving experience.

One quote that sticks with me, going back to the day’s experience of driving on open roads, and the fun that can come with it, is when Oppenheiser said, “The Camaro happens to be one of these cars, as Corvette, that people don’t need, it’s a car you want. So, when you talk about the market shrinking in general the car market is moving towards crossovers – but in the end my personal opinion is that when you get home at the end of the day, whatever your transportation mode is to work you want to peel off that car cover and get into that Camaro. It’s a car you want, it makes you feel good, connects you to the driving experience.”

It was definitely a great experience and I hope to hop back into one of these marvels of engineering sometime to experience again, as Al Oppenheimer says, “spirited driving”.

Q&A: Getting Answers to “What Men Want”