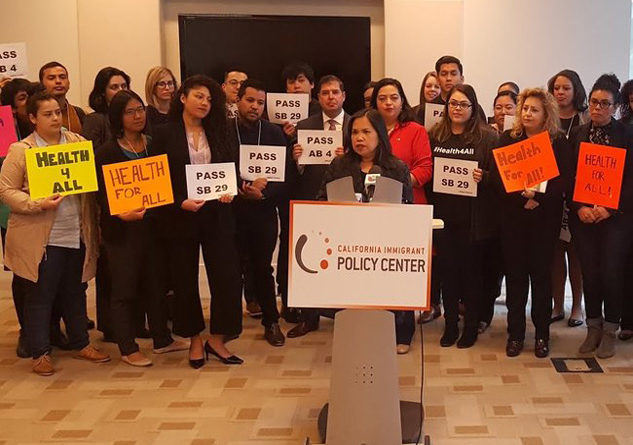 Supporters of Medi-Cal for undocumented immigrant adults gathered at a rally at the California Endowment in Los Angeles on Wednesday. Photo Credit: California Immigrant Policy Center
by ElObservador 12/14/2018

A recent University of California, Berkeley study found California has three million uninsured adults – and 1.4 million of them are undocumented and could apply if they meet the income requirements.

Assemblymember Joaquin Arambula – D-Fresno County – is a former emergency room doctor. Arambula introduced Assembly Bill 4, and he says he’s seen the suffering that comes with having no access to health insurance or preventive care.

“When you care about them, you make the cost-effective investments into the community to keep them healthy, rather than allowing them to deteriorate and become sick because of preventable causes,” says Arambula.

Arambula sees health care as a human right and wants to move toward universal health care. Opponents say such a system would be too expensive.

Opponents also argue that the prospect of free health care would attract many more undocumented immigrants to the state and become unsustainable. But Arambula notes that California’s diversity and pool of hard-working immigrants has been one of its strengths.

“California has long had a history of incorporating those who are new to America,” says Arambula. “And it’s in our DNA, as a state and a country, to recognize the importance that immigrants play in our community.”

If it passes, California would be the first state in the nation to make such a move.

During the last legislative session, two similar but more modest bills didn’t make it past the finish line. Those bills would have extended Medi-Cal to undocumented immigrants between ages 19 and 26, and to those over age 65.