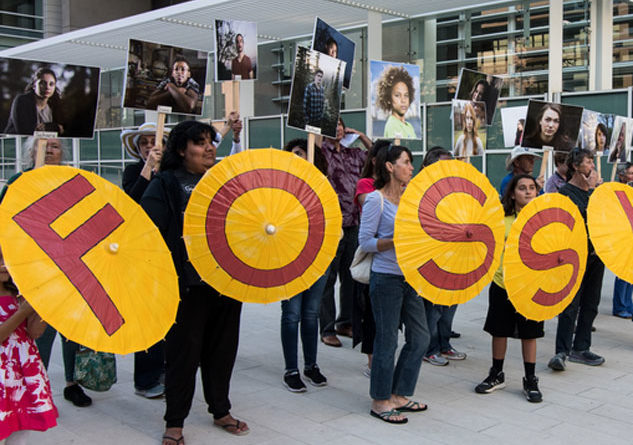 Climate groups around California rallied last week in support of the lawsuit brought by children blaming the federal government for carbon in the atmosphere from oil and gas wells on public lands. Photo Credit: Bill Wellhouse
by ElObservador 11/09/2018

SAN FRANCISCO – The trial is back on in the lawsuit brought by a group of 21 young people who are suing the federal government over global warming – after the U.S. Supreme Court ruled against a request from the administration to block it.

Attorneys for the youths argue that the federal government is depriving children of the constitutional right to life, liberty and property by promoting policies that cause climate change. Stephanie Corkran is an organizer with San Diego 350, a group that fights to end dependence on fossil fuels. She said the plaintiffs in the lawsuit are not seeking monetary compensation.

“Their goal is actually for a change in policy,” Corkran said. “They would like the government to facilitate transition to clean energy and away from fossil fuels so that they inherit a planet that is conducive to life and would be better for them to live in.”

The suit argues the federal government is speeding up climate change by allowing oil and gas drilling on public land, supporting subsidies for fossil-fuel companies and pulling out of the Paris Climate Accords. The Justice Department has argued the case should be dismissed because it is costing too much money to defend, and is an attempt to circumvent the policies of a duly elected president.

Corkran noted this lawsuit was filed in 2015, during the Obama administration – and is not aimed specifically at Trump.

“This case is really saying that for the last 40 years, through different party-controlled administrations, this is a consistent problem,” she said. “This is not a partisan issue.”

A new trial date will now be set. The Supreme Court justices, in their refusal to stop the trial, did indicate that the government may still seek to halt the case at a later stage in the litigation before the 9th U.S. Circuit Court of Appeals.

Updates on the trial are available at OurChildrensTrust.org.

What are PFASs and why should we be concerned about them?

I’m getting ready to join the electric car revolution now that my old clunker is getting on in age. What’s the latest and greatest? And is now a good time to buy an EV?