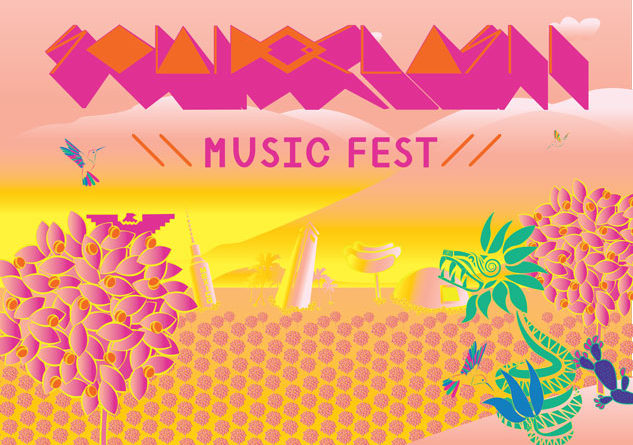 On the eve of the third annual festival, expansion and collaboration is key

The San Jose based music and art promoters Sonido Clash have upgraded their all-ages music festival in its third year by adding new events, panels and an added stage. It’s still all about the community and the tunes though.

For 2018 the festival will again return to the School of Arts and Culture at Mexican Heritage Plaza, although this time around Sonido Clash says they will be curating more of the space with an expanded program and artist lineup.

Roman Zepeda of Sonido Clash highlights one of the main focuses of this year’s festival. “We definitely decided to add more women to our lineup. We made that a point because last year we didn’t have that many.”

Though the music collective has generally strived for diverse musical acts to their lineups, their Selenabration festival this year featured mostly women artists, this year was meant to highlight diversity even more so.

“We were thoughtful in that aspect, we were inclusive. We also wanted to represent some [of] San Jose for people that live in the East Side, just the style,” says Zepeda.

From classic 80’s breakdancing groups to up and coming rappers, focus this year is also on the San Jose based artists. Many local DJ’s are in this year’s lineup, including Zepeda. Other notables from the area include, “Carlos Diaz who’s been around since the 80’s is really big in the high energy scene and has a store in the east side that sells records. We have DJ Nelly who’s a DJ at Miami Beach Club, and he’s been there for a really long time. We’ve got DJ War who used to be part of a rebel dance crew here in the East Side,” adds Zepeda.

Egyptian Lover, a seminal influence in the 80’s Los Angeles dance and rap scene will also be one of the highlights. Along with the “king of cumbia” Alberto Pedraza from Mexico City and local dance crew Playboyz Inc., there will be a lot of classic acts headlining the festival alongside the newer and up and coming acts. According to Zepeda, one he’s especially looking forward to is Jasper Bones, a Los Angeles based singer-songwriter that is described as “wavy soul”, and who has been steadily rising in popularity over the last few months.

“We also have somebody from Mexico City that sings reggaetón, Rosa Pistola. She’s considered to be at the forefront of the new reggaetón scene coming out of Mexico. We have Los Blenders and E. Arenas from Chicano Batman who is experimenting with Banda Music. Ratas En Zelo is a punk band that is all-female and has an accordionist in the band. So, it’s just a mix of different sounds that we have this year,” says Zepeda.

Quynh-Mai Nguyen is an executive producer for the festival this year and believes that the focus on local artists is much more prevalent within the poetry and art areas of the festival.

“I think what makes the festival special compared to others is that there’s still that key element of partnership and collaboration with the community and different aspects of the community that you don’t see at other festivals as much or are given recognition,” she says.

Nguyen says there is a lot of talented artists in the area, but they don’t necessarily get the most attention. “For example, for our live art we’re working with a crew called Together We Create (TWC). It’s made up of Elba Raquel Martinez, Roberto Romo, Wisper Talamantes, and Mesngr.” A collection of educators and artists, TWC will be creating live works alongside the live music at the festival.

Jarvis Subia, a spoken word poet who teaches poetry at DMC studio at MACLA, will be bringing some of his students to the poetry stage at the festival where they will be performing for the first time.

“It’s really nice presenting those artists who are emerging or well-known but also giving access to students that learn from under them. That’s what makes the festival special, providing the access for everyone,” says Nguyen.

Among the newest edition to the festival, the panel discussions, Nguyen and Zepeda are both excited for what will come of this addition.

Nguyen says that with these discussions they hope to, “bring the experience outside of music [by] taking artists, whether it’s Chulita Vinyl Club giving a panel discussion on their history and their experiences of being an all women vinyl collective, to having a sonidero banda discussion.”

Sonido Clash hopes for another successful festival this year, with emphasis on the community members attending to enjoy it alongside the artists in the intimate venue.

Zepeda says, “It’s family oriented. We have a lot of activities for kids. It’s in a beautiful venue. It’s different than other festivals in that we’re not trying to promote just partying, we’re trying to promote also a cultural experience. You’re going to listen to different sounds you’ve never heard before.”

Nguyen ends by saying, “This is our third year doing it and every year we seem to be growing more and more and what’s nice about it is that this year we’re seeing more support from outside of our usual organizing team, members of the community, they believe in what we’re doing. I think to be able to have that and have people come sit with us at the table to help make this experience into a reality is just a testament to the hard work and the love we have for San Jose, especially East San Jose.”

More information can be found in our Sonido Clash Music Fest guide on pages 10-11.

I know that ranchers and environmentalists have traditionally been at odds, but what are some ways they are working together these days?