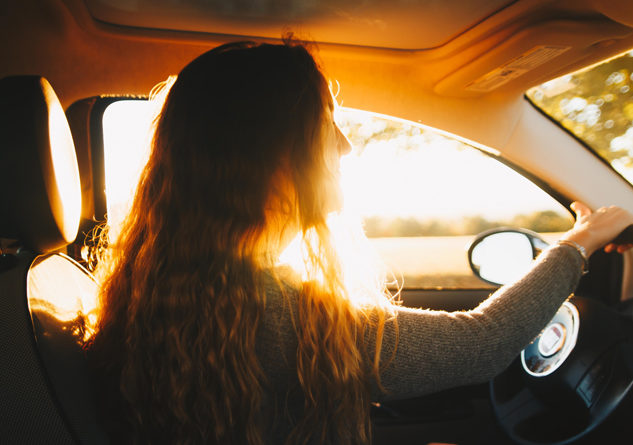 Youth have healthier behaviors today than they did 25 years ago, according to new data from the Youth Behavior Surveillance Survey. This data set, which has been released biannually for more than 25 years, is one of the Centers for Disease Control and Prevention’s (CDC) only consistent windows on trends in youth behaviors that contribute to the leading causes of death and disability among youth and adults.

While there are a handful of disappointing trends (e.g., increases in obesity and time spent gaming, and decreases in sleep and consumption of vegetables), more youth today than ever before report wearing seatbelts, and fewer report that they smoke cigarettes, consume alcohol, take drugs, have sex, and do these things in combination. Here are the positive trends: 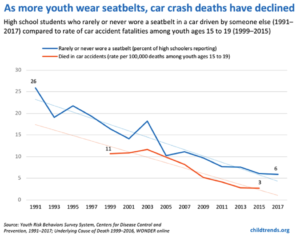 Some states have done a better job than others to encourage seatbelt use and reduce car crash fatalities: Kansas, California, and Colorado have some of the lowest rates of youth who report that they never or rarely wear a seatbelt (5.0, 5.8, and 5.9 percent, respectively). Other states have work to do on encouraging seatbelt use: In Arkansas, for example, 17.5 percent of high school students report that they rarely or never wear their seatbelts.

Over the last 25 years, rates of smoking among high school youth have fallen by 50 percent. 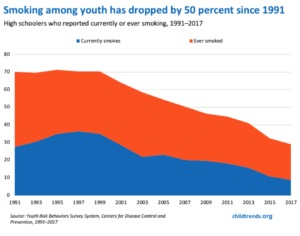 In the 1990s, seven in ten high school students reported trying cigarettes, a figure that has dropped to less than one in three today. Students reporting current smoking dropped from over one in four (28 percent) to less than one in ten (9 percent). While the rate of vaping—the newest form of tobacco use—is high (13 percent report current use, not shown), it still does not replace the cigarette users who have dropped off over the last 25 years. Amidst continued reports of a “vaping explosion,” the YRBSS data show that vaping use is already significantly down from 2015 (24 percent), the first year for which data were collected.

The states with the highest rates of youth who reported currently or ever smoking were Kentucky and West Virginia (about 40 percent in each state). In those states, 14 percent reported that they are current smokers.

The use of alcohol is down by more than 25 percent among high school youth.

In 1991, 82 percent of high schoolers reported having tried alcohol. By 2017, that number had dropped to 60 percent—a 26 percent decrease. The share of students who reported currently drinking alcohol dropped from 51 to 30 percent—a 41 percent decrease. Importantly, the percentage of students who drank before age 13—an indicator related to likelihood of addiction and long-term alcohol problems—is also at an all-time low of 16 percent.

Among states, Utah has the lowest rate of students who currently use alcohol (11 percent). Louisiana, Montana, Arizona, and Vermont report some of the highest rates (34, 33, 33, and 33 percent, respectively).

Reports of ever using cocaine, heroin, and methamphetamines among high school students are at all-time lows.

As the nation continues to deal with the opioid crisis, it is important to note that self-reports of prescription drug abuse were included for the first time as part of the most recent YRBSS survey (2017). In that survey, 14 percent of students reported that they ever took prescription pain medicine without a doctor’s prescription or differently from how a doctor told them to use it. Although we do not yet have comparison data, self-reports of heroin use can provide insight because heroin use often results from prescription opioid abuse. The decrease in reported heroin use (2.5 percent in 2009 to 1.7 percent in 2017) and the stable rates of drug-related teen deaths (4.3 per 100,000 15- to 19-year-olds in 2007 to 4.2 in 2016) suggest that the opioid epidemic is not currently hitting teens.

While most of these percentages are low, some states have very high rates of drug use. About one in ten students in Louisiana, for example, have tried each of cocaine, heroin, and methamphetamines.

Fewer youth report having sex, and those who do are having sex later in life and with fewer partners, with rates dropping by one-quarter to two-thirds. 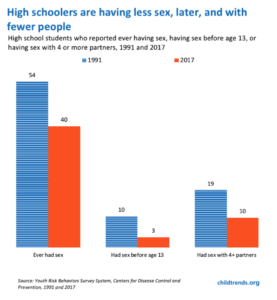 Forty percent of students reported having ever had sex, an all-time low, and down from 54 percent two decades ago. The proportion of students reporting they had sex before age 13 is down to 3 percent, a drop of more than two-thirds. One in ten reported having had sex with four or more partners, an all-time low and about half the rate from 1991. All of these trends mirror the dramatic drop in teen pregnancy rates over the same time.