Traveling Through the Mythic Big Sur 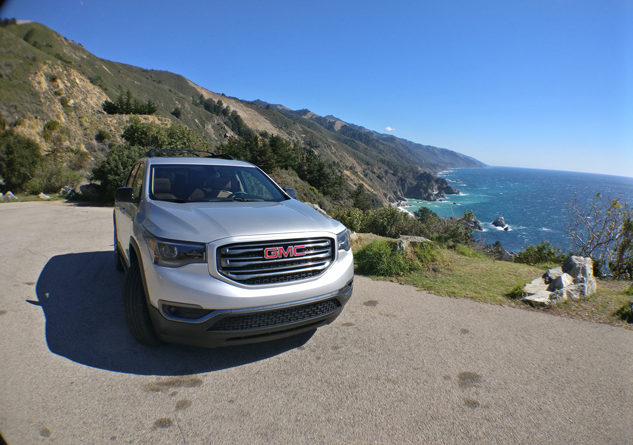 The GMC Acadia All Terrain amongst the scenery of Big Sur. Photo Credit: Arturo Hilario
by ElObservador 05/11/2018

We Take a Drive in a GMC Acadia Down to Writer Henry Miller’s Oasis, a jewel of the West Coast

Down highway 1, alongside the coasts of the Pacific to one side and hugging the edge of the United States on the other, is a mystical place made even more so by the vast world it contains within and the quiet nature of its appeal.

150 miles South of San Francisco and 300 North from Los Angeles lies the 90 mile stretch of curvy, majestic road that has fascinated people for centuries. The Spaniards who were the first to put it in writing called it “El Sur Grande”, or “The Big South”.

For this trip we took the GMC Acadia All Terrain model, which was a great choice to take through Carmel and down Monterey Bay towards our eventual retreat for the day in Big Sur. The All Terrain model (SLT-1) has a MSRP price of $42,375.

With a two-lane road being the only route through this region, Big Sur’s beauty is matched by the ruggedness of nature, the road sometimes the only hint of humanity. During our trip we were still witnessing the effects of harsh rain a few years ago which caused landslides that swept pieces of the highway into the sea; to the day the affected areas are still being repaired.

Henry Miller was a writer from New York City who came to the allure of Big Sur in the 1940’s. Here he settled in what was at the time a very isolated Big Sur, there was no electricity, and no two-lane road to speak of. The isolation was a haven to him, allowing him to think, write and live as carefree as he could.

Even now as we took the trip down the winding roads of Big Sur, each mile picturesque in its own way, there was still the feeling of detachment from the city, a pure approach to driving with the only distraction being Big Sur itself. From rolling green hills adjacent to bright hues of ocean, Big Sur cultivates a different vision of sunny California, the sometimes chilly, misty, redwood tree-laden escape.

Miller left his mark here not only in his writings about this place, but in a library named after him that sits nestled alongside a slightly down sloped curve. Although he was a man that traveled the world and wrote about it extensively, his heart ended up immeasurably attached to the terrain and lifestyle of Big Sur. In a way his words and attitude about the region helped tame it just a bit, so that others could drive through and enjoy its virtues and breathtaking sights.

His works include the “Big Sur and the Oranges of Hieronymus Bosch”, which chronicles his 18 years living in Big Sur. Even if most of his writings weren’t so much about Big Sur, he himself was what popularized the region. Over time, and through strict housing laws and nature preservation, the region became slowly more accessible to the public.

One example of human innovation conquering, or should I say simply “adjusting” to nature, is the iconic Bixby Bridge, which joins two sides of Big Sur at 260 feet high, one of the tallest bridges in the world of its kind. We definitely took the time on the way through Big Sur and on the drive back home to stop, stare, and take selfies with the bridge.

Sunny Cruising in the Acadia

Our drive was on a sunny, low 70’s degree day. I like my warm days not so hot, so this was perfect for keeping the windows down and the moon roof open on the Acadia.

The GMC Acadia is a feature rich mid-size SUV incorporating what I have come to expect in GM vehicles, comfort and utility. As aforementioned the Acadia reviewed was the All-Terrain edition, which included a unique color interior and 3 rows of seats, totaling 7 passengers.

The traction selection system allowed us to go from traffic at our starting point in Google’s hometown of Mountain View, to hitting the highway 1 curves in “Sport Mode” with a simple flick of a dial (which I note, needs to be done at under 30 mph).  The mileage for this crossover was good, close enough to GMC’s numbers, which are 18/25 mpg in city/highway scenarios and all depending on the driver.

The Acadia is as compact as you would want a SUV without actually making you feel like you’re tight for space. The third row is optional on the Acadia, our version did include it and it is meant to easily disappear, folding down into the floor and allowing for some extra storage space in the rear. Also equipped in our version was the 4g hotspot, which allowed for music and podcast playback without a stutter.

So, after a long day trip to the edge of the West Coast and back, I will say I was cozy and comfortable in the Acadia and would definitely recommend venturing out there if given a chance. Do look at traffic info for road construction and closures, and keep in mind that during the summer it is peak season at “the big south”.

One last thing to note: When in Big Sur do stop by The Henry Miller Library. It is a cozy wooden structure filled with books for sale and outfitted with trinkets and notes from visitors and Miller himself. On the outside of the Library there is a framed, handwritten note from him, a portion reads:

“Life along the South Coast is just a bed of roses, with a few thorns and nettles interspersed. The life class meets every Monday regardless. Refreshments are served when demanded. Those interested in celestial navigation are advised to first obtain a rudimentary knowledge of integral calculus, phlebotomy, astral physics and related subjects. The use of liquor is strictly forbidden on interplanetary flights.”

IT IS TIME TO VOTE: YOUR VOTE IS YOUR VOICE (AND MORE)