A Discussion of Documentary Film “Adios Amor: The Search for Maria Moreno” 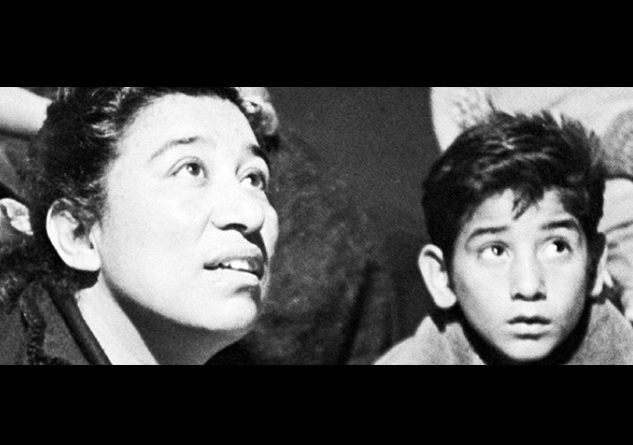 In “Adios Amor: The Search for Maria Moreno”, the life of a woman who unionized California farmworkers in the 50’s and 60’s is revisited. Photo Credit: Cinequest
by ElObservador 02/23/2018

Having its world premiere will be the documentary film “Adios Amor: Searching for Maria Moreno”, which seeks to rediscover the woman who preceded Cesar Chavez and Dolores Huerta in their struggle for unionizing California’s migrant farmworkers in the 1950s and 1960s.

Maria Moreno born in 1920 Texas is a descendant of a Mexican grandfather and native American grandmother.  Her father was a Baptist minister and she began to work in the fields at the age of 8. She would labor in the fields of Texas before relocating to California, she married at 15 to a husband of 21 and went on to have 10 children while picking the crops of California’s Central Valley and Santa Clara County.

She went on to become the first Latina hired as a union organizer and spoke to landowners, college students and politicians on the poor working conditions of migrant laborers. Though having had only 2 years of formal education, Maria was an aggressive spokesperson for the rights of farmworkers and would often proudly say, “I know how to handle a man’s job like a man and I’m not afraid to say it. I’m an American citizen and I’m talking for justice.”

Filmmaker Laurie Coyle brings Maria’s history back to life for a new generation of Latino activist who are still championing the rights of farmworkers, of immigrants and the undocumented. El Observador spoke with Laurie about her film and what it means to her and to our modern conversation on social justice.

How does this film compare to some of the other films you have worked on?

First, with history/biography documentaries, the filmmaker usually completes the research and has a working script before filming starts. In the case of Adios Amor, I started filming before I knew what I would find and where the story would lead. I was a year into filming before I made contact with Maria Moreno’s family, and I was three years into filming before I found the audio recordings of Maria’s voice. I actually had a backup plan for telling Maria’s story if I had never found any audio recordings and we never heard her voice. Now it’s impossible to imagine “Adios Amor” without Maria’s voice—her voice is every bit as important as the photographs. She speaks directly to us, and her voice is incredibly moving.

How was your search for Maria Moreno aided by others, there is a scene with Radio Bilingue out of Fresno asking listeners if they know of Maria, how did you find these supporters and were they also unfamiliar with Maria’s legacy?

My search for Maria Moreno benefitted from the assistance and guidance of many people. I never would have known Maria Moreno existed if it hadn’t been for George Ballis’s amazing photographs, so I have to thank him first and foremost. We never would have heard Maria’s voice if it weren’t for Ernest Lowe’s recordings and radio programs broadcast on KPFA radio in the 1960s. If Ron Taylor hadn’t written a few paragraphs about Maria in his book Chavez and the Farmworkers in the 1970s I wouldn’t have had any clues about what happened to her and where she went. Maria’s co-worker Henry Anderson kept an amazing treasure trove of flyers, pamphlets, and recordings up in his attic. Adios Amor is also a tribute to them. They were the keepers of the flame and kept Maria’s memory alive.

During the search I turned to Radio Bilingüe, a nationally syndicated radio station to reach beyond the small circle of journalists and activists. I wanted to make contact with farmworkers who had known Maria Moreno back in 1960. Radio Bilingüe’s headquarters are in Fresno, which is also where Maria Moreno was headquartered when she organized for the Agricultural Workers Organizing Committee (AWOC). They were very supportive of my search. Most of the farmworker activists that I tracked down had been active during the Cesar Chavez years, but knew nothing about Maria Moreno. It’s as if a curtain had been drawn between Maria Moreno’s achievements and the better-known story of Cesar Chavez and the farmworkers.

The envelope of historical artifacts from Maria’s granddaughter seemed to come out of nowhere. How did that discovery materialize and how did you feel when you came upon it?

Although the envelope seems to come out of nowhere, it arrived 10 months into the making of the film. The irony was my search for Maria Moreno was that Maria’s family contacted me before I had located them. A friend of theirs had seen a notice online about the film and put me in touch with Maria’s granddaughter Lisa Alama. Shortly thereafter, she mailed me a packet of documents related to her grandmother’s union activities. I reached out to the rest of the family and made arrangements to meet with them. I was a little nervous because I didn’t know what I might find out, and whether that might be the end of the project. But it turned out to be the beginning of a remarkable journey in which they became searchers too: sharing childhood memories, visiting their mother’s birthplace in Texas, embarking on a pilgrimage to the desert home that had sustained them during their mother’s exile from the labor movement.

Having spoken to other filmmakers especially documentary filmmakers I am always amazed by how much footage they leave on the cutting room floor. What was your experience in making this film with respect to the material you probably wanted to include but had to leave out of the final product?

You’re right about that! A film that works is a lean, muscular creature. So you really have to make tough choices about what to keep and what to cut. Every scene, every image has to move the larger story forward. There’s no room for detours! Some of my favorite moments ended up on the cutting room floor, like the story that Maria’s youngest daughter Libby tells about their first days in the desert. They were squatting on open land when a tall man in a big cowboy hat drove up in a pickup truck and announced, you know you’re on my land. Maria answered, “Well I’m sorry but God told me to come here.” The landowner, whose name was Mr. Hancock, allowed them to stay on the land for years in exchange for their feeding and watering his cattle. But you can imagine that scene from the perspective of 5-year old Libby hiding behind her mother’s skirt!

The Morenos also shared an interesting chapter in their lives when the family settled in Salinas and Maria worked on the Cannery Row made famous by John Steinbeck. They built a modest home, but eventually lost it and had to rejoin the migrant stream.

What other project are you working on next that you want to share with our readers?

For the foreseeable future I will be busy getting ready for Adios Amor’s national broadcast on PBS during Latino Heritage Month later this year. After that, we will be taking the film on a circuit of community screenings in rural California counties. I do have two short films in the works, one featuring a Zimbabwean dancer and one about a woman artist. For my next big project, I can’t say yet. My films are always searches, and what inspires the search is often unpredictable or quirky, like finding a doll in a junkshop or these photographs of Maria Moreno. It’s as if these things speak to me and ask me to tell their stories. Whether the stories are historical or imaginary, they celebrate the hidden beauty, struggles and accomplishments of people whom our society has overlooked or forgotten. In that sense they are about justice, too.

For tickets and film screenings visit www.cinequest.org for a full lineup of all the films during the 2-week festival in San Jose and Redwood City.