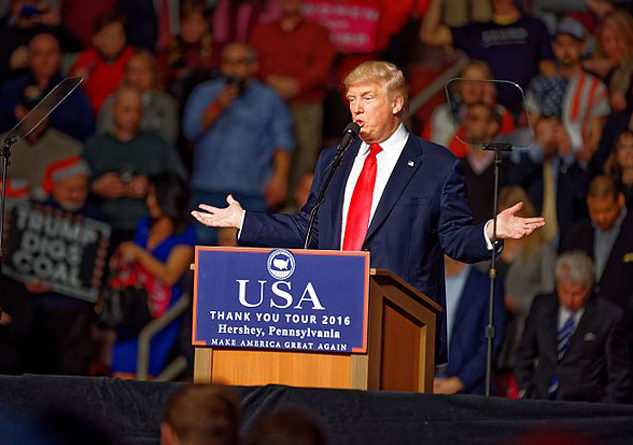 President Donald Trump touched on a range of topics in his State of the Union address, including the economy, health care and immigration. Photo Credit: Wikimedia Commons
by ElObservador 02/02/2018

SACRAMENTO, Calif. – Civil rights leaders say President Donald Trump’s State of the Union claim of massive gains under his leadership fell flat in light of the policies he pursued during his first year in office.

The president Tuesday night bragged about appointing conservative Neil Gorsuch to the Supreme Court and filling many lower court vacancies.

But Todd Cox, policy director at the NAACP Legal Defense Fund, says Trump’s nominees could chip away at minority rights for decades to come.

“President Trump’s nominees demonstrate a breathtaking hostility toward civil rights and equal justice, and their records are rife with animus towards minority communities who depend on the courts to vindicate and protect their rights,” Cox states. “President Trump is reshaping the federal courts to enable and lock in his retrograde, discriminatory policy agenda.”

The president also lauded the passage of the Republican tax reform bill, saying it lowers taxes on the middle class and will encourage companies to create more jobs on American soil.

However, Nicole Berner, general counsel at the Service Employees International Union, says Trump’s tax bill is a huge giveaway to the upper 1 percent of taxpayers, and she maintains his administration has worked hard to repeal the Affordable Care Act even though that would cause tens of millions to lose access to health care.

“Wages are stagnant and job growth has slowed to a six-year low,” she stresses. “Millions of Americans work second and third jobs but continue to struggle to support their families.

“And despite his cynical campaign promises, Trump has focused on helping corporations and the wealthy at the expense of working people.”

In addition, the president also brought up his efforts to promote religious freedom – something Sharon McGowan, director of strategy at Lambda Legal, says is a code word for discrimination against LGBT people.

“We have an attorney general who has weaponized the Department of Justice against LGBT people, a secretary of education who has tried to pull the rug of legal protection out from under transgender children and officials at the Department of Health and Human Services who have created a whole new enforcement unit to shield those who wish to discriminate against LGBT people in the name of religion,” McGowan points out.

Trump also proposed a deal on DACA that has been criticized by conservatives for giving Dreamers a path to citizenship, while drawing fire from Latino leaders concerned about the proposed border wall and an end to the visa lottery system.

Can you settle this age-old question for me once and for all: Is it greener to take showers or baths? And how can I save water either way?