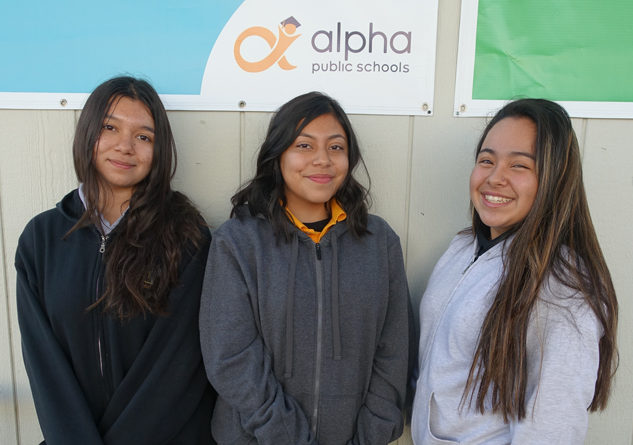 Helping to prepare a child for life-long success requires a variety of support.

Academic opportunities are important, but they aren’t the only kind of support youth need. Around 90 percent of lower-income first-generation college students don’t graduate within six years, far below the national average for college completion. There is promising research that providing mentoring and emotional support increases student persistence in higher education. Researchers also find that helping students build these social-emotional skills earlier will result in academic, professional and personal success.

Students at Alpha Public Schools, whose students are nearly 80 percent Hispanic, spend their middle school years becoming a leader on the blacktop through Personalized Leadership Training (PLT). By providing students the opportunities to build teams, work together, and lead in a meaningful way, Alpha has watched middle school students go from following others down the wrong path to leading their peers toward success.

The multi-year program—which brings together physical activity and social-emotional learning—in East San José has become an opportunity to emphasize real-world leadership habits and provide students a safe environment in which to practice and hone those skills.

The school network’s current freshmen were the first to complete the full three-year program going from participants to the eventual leaders last fall. Among these students are 14-year-olds Yami Penaloza and Tyena Lugo as well as 15-year-old Iris Valenzuela. The young women recently reflected on their experience with PLT and shared how it prepared them for success in high school.

The idea of spending time shadow boxing and working on mastering push-ups or running the mile wasn’t appealing to the young women in middle school. In fact, they admitted to hating the idea. They weren’t confident they could improve their mile time, nor were they truly interested in doing so. It was their PLT coaches who showed them that overcoming these types of physical and mental challenges was worthwhile – largely through leading by example.

“They would push us but go through it with us,” said Lugo, who transferred to Alpha in seventh grade.

Valenzuela agreed, adding she appreciated that they were going through it together. These challenges were opportunities. Head PLT Coach Jeff Quinlan would share stories with the students of his own struggles. The life lessons would be inspirational but also motivating. Success isn’t achieved on your first try. It takes time. It will include setbacks. But it’s how a person decides to proceed that’s important.

For the three students, it is the coaches who make the program successful. These are adults who treated them as adults, expected honesty, and showed their own vulnerability. It created a trust and respect with the students that grew even stronger over time.

Even with trust, the students were unsure if they could successfully complete the challenges set out by the coaches throughout their time in the program. Coaches assured the students that they could physically do everything asked – and that if they weren’t successful, it was a mental block, explained Lugo.

Valenzuela struggled with this idea at first, “How can I hold myself back mentally?”

Working with the coaches, this idea began to make sense. Penaloza explained, “You learn, if you really want something, you have to work for it.” That lesson was reinforced time and again in challenges ranging from running the mile to managing a class of fifth grade students.

Penaloza and Lugo were leaders in eighth grade, meaning they helped to lead the classes with the younger students. It was overwhelming at times. The younger students didn’t always listen. The older students hadn’t built up the trust of the younger students. They weren’t working as a team. Through the struggle, the eighth-grade leaders were able to see how important the role of the coaches was. They huddled to create a game plan and, with the help of the coaches, were able to get things on track. In fact, the students ended the year having finished the curriculum and even earning a few free days—an accomplishment that celebrated the hard work of everyone involved.

What had started for many students as a class that pushed students physically and mentally, turned out to build confidence in the three young women.

Lugo, for example, was a bit of a troublemaker before she started at Alpha. She certainly did not see herself as a leader, nor an example. Today, she’s an ambassador for the school network. She’s realized the respect she gives others is often reciprocated leading to less talking and more listening in class. For her, the experience was less about the physical challenges themselves and more about learning long-term lessons for how to manage day-to-day life.

Penaloza agreed. Previously, she was a student who would not take on big roles, but has found herself speaking up and recognizing that any goal takes work. In PLT they shared the reality of life but would also work through challenges and problems openly, constructively and recognize growth—tools she found helpful.

For Valenzuela the experience helped her care less about the opinions of others and focus more on being true to herself.

“I became more confident, and I thank the coaches for that,” she said. “The workouts, I hated. But, the lessons I love. And I wouldn’t change anything.”