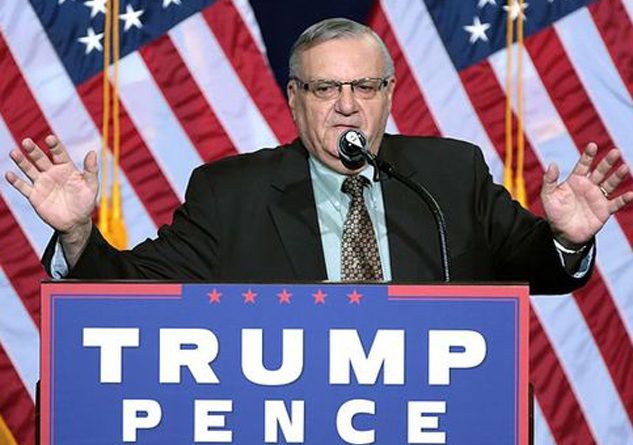 Latino groups are vowing to revive the Bazta Arpaio campaign to defeat him in his bid for the U.S. Senate. Photo Credit: Gage Skidmore
by ElObservador 01/12/2018

PHOENIX – Groups that fought to kick former Maricopa County Sheriff Joe Arpaio out of office are now mobilizing to defeat him in his bid this November for the U.S. Senate seat being vacated by Jeff Flake.

The 85-year-old Arpaio lost his job of 24 years in November 2016 and was found guilty of criminal contempt for defying orders for his deputies to stop racially profiling Latinos.

Carlos Garcia, director of the Puente Human Rights Movement, has helped to lead the charge against Arpaio for years.

“Sheriff Arpaio’s policies were bigoted,” Garcia states. “The intention was to destroy our communities, to separate our families, to humiliate and dehumanize undocumented people. He has traumatized an entire generation.”

In his announcement, Arpaio said he’s disappointed with the way the Senate has treated Trump and wants to bring new blood into the chamber.

Garcia says a lot of Trump supporters voted for Arpaio’s Democratic opponent in the last election. And he vows that the Bazta Arpaio movement will rise up to defeat him again.

“Sheriff Arpaio is basically the bogeyman to our community, and so we worked really hard, got him out of office, and we’ll do the same if he becomes a candidate of the Republican Party,” Garcia states.

The other declared candidates in the Senate race so far are former state Sen. Kelli Ward, a conservative Republican who also supports Trump, and U.S. Rep. Kyrsten Sinema, a centrist Democrat.