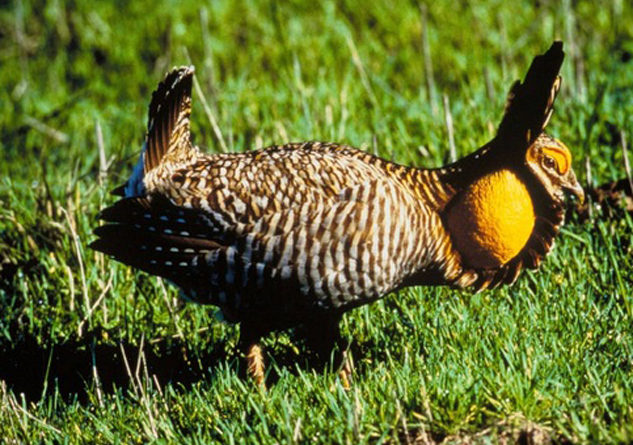 Conservationists are worried that many of the endangered Attwater prairie chickens at a wildlife refuge near Houston may have perished in Hurricane Harvey. Photo Credit: U.S. Fish and Wildlife Service
by ElObservador 10/06/2017

EAGLE LAKE, Texas – Hurricane Harvey disrupted the lives of millions of people along the Texas Gulf Coast, but also may have damaged or destroyed as many as a dozen critical wildlife habitats.

The massive storm, with 120-mph winds and rainfall measured in feet, is believed to have damaged nesting sites and eroded marshes and coastlines that are home to dozens of species of birds and marine life, including some listed as threatened or endangered.

Ryan Fikes, a staff scientist for the National Wildlife Federation’s Gulf of Mexico Restoration Program, said agencies such as Texas Parks and Wildlife and the U.S. Fish and Wildlife Service are just beginning to survey the damage.

“Right now, we’re doing initial assessments,” he said. “Both the state and federal agencies are trying to get out there and start doing some status assessments. They’ll be doing more detailed monitoring over the coming weeks and several months to really pinpoint the exact amount of damage.”

Aransas National Wildlife Refuge near Matagorda Island sustained damage to the salt marshes where endangered whooping cranes feed when they return in October, Fikes said. Attwater Prairie Chicken National Wildlife Refuge, south of Houston, absorbed about 50 inches of rain from Harvey, he said, adding that about 60 endangered prairie chickens were in the refuge before the storm but as few as 10 are believed to have survived.

Increases in both the size and intensity of recent storms have scientists factoring climate change into their approach to managing wildlife sanctuaries, Fikes said.

“Storms like Harvey and Irma and Superstorm Sandy are much larger than what have historically taken place,” he said, “and National Wildlife Federation believes that a lot of the intensity increase in these storms is due to global climate change and increases in sea-level temperatures.”

He said some marine species on the Texas coast, such as shrimp and crabs, appear to have survived, while many oyster beds sustained losses. Marine mammals, such as bottlenose dolphins, may have been injured due to fresh-water inflows to bays and estuaries, since many coastal species can’t survive outside a saltwater environment.