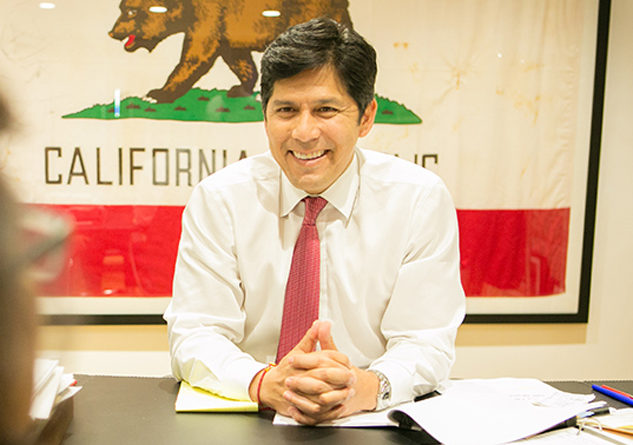 SB 100 Now Heads to the Assembly Natural Resources Committee on

SACRAMENTO – The Assembly Committee on Utilities and Energy on Wednesday July 12, 2017, approved Senate Bill 100, by Senate President pro Tempore Kevin de León (D-Los Angeles), which  will set California on a path to 100 percent renewable energy by 2045. The measure passed on a 10-4 vote.

“Twenty-eight years ago, the world was just discovering the internet.  We had no idea just how rapidly and completely the internet would change our lives,” de León said. “That’s the type of opportunity we have today in California, with clean energy. SB 100 will drive technological  innovation, create new jobs, and clean up our precious air.”

California already has one of the most aggressive renewable energy goals in the nation, under SB 350’s requirement of 50 percent by the year 2030. But technology is advancing rapidly.  SB 100 accelerates the existing target to 60 percent RPS by 2030, and requires retail energy sellers to plan, model, and invest over the next 28 years to reach the 100% clean, zero carbon, and renewable energy target.

Tom Steyer, President of NextGen Climate said, “California is once again pioneering the path forward, taking bold steps to protect our clean air and water and create a more prosperous future for all Californians.  By committing to 100 percent clean energy, California would show once again why it leads the nation and the world in advancing climate solutions and clean energy.  SB 100 is a bold and ambitious step into the low-carbon future, and we must continue to act decisively to safeguard Californians’ air and water, address the threat of climate change, and create good-paying clean energy jobs.”

“SB 100 builds off of California’s great progress in lowering carbon emissions. We are confident that the renewable requirements in SB 100 can be met with a well balanced portfolio of renewable energy resources. We look forward to working with Senator de León to ensure California’s energy needs are met with reliable, affordable and clean resources,” said Jan Smutny-Jones, CEO of Independent Energy Producers.

Shannon Eddy, Executive Director of the Large-scale Solar Association said, “LSA is pleased to see SB 100 move forward. The passage of this critical legislation moves California one step closer to strengthening its role as a global climate and clean energy policy leader.  With it will come unprecedented economic growth and much needed jobs for California.”

Peter Miller, Western Energy Project Director at the Natural Resources Defense Council said, “The 100 percent clean energy target in SB 100 will accelerate progress toward cleaner air, a prosperous economy, and a healthy planet for future generations.  Once again, California can show the world what can be done with a clear vision and an unwavering commitment to progress.”

“The California Environmental Justice Alliance is excited about the expansion of renewable energy with SB 100, hat will transition our state away from fossil fuels that have disproportionately impacted the most disadvantaged communities and communities of color.  SB 100 charts a pathway for the public health and economic benefits of local renewable energy to reach communities that need it the most.  In a time where our nation is moving backwards on renewable energy, SB 100 offers an opportunity to put equity at the center of energy policy,” said Strela Cervas, Co-Director of the California Environmental Justice Alliance.

“Powering the most populous and prosperous state in the country on 100 percent carbon-free electricity is bold, aspirational and achievable.  Technology is already available to help the grid run on very large quantities of renewables, and the cost of investments needed to make this happen are coming down.  We applaud Senate Leader de León for his vision and leadership.  This bill will jump-start the research effort to securely ease us off fossil fuels.  Showing the world how to run a grid on 100 percent carbon-free generation would provide a blueprint for significant cuts in global warming emissions,” said Laura Wisland, Senior Energy Analyst at the Union of Concerned Scientists.

The Popular “Welcome to San Jose” Mural Could Disappear