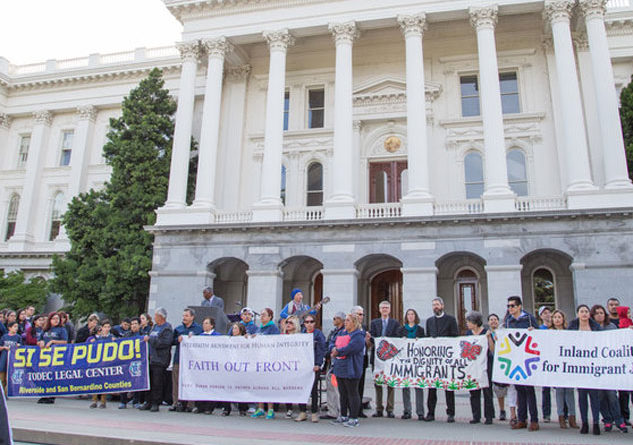 SACRAMENTO, Calif. — Advocates for immigrants promoted the idea of making California a “sanctuary state,” with a big rally which occurred on the morning of Monday May 15th, on the steps of the Capitol building in Sacramento.

Jon Rodney is communications director with the California Immigrant Policy Center, which coordinated the event. He said the Golden State should resist the Trump Administration’s deportation policies wherever possible.

“This year, all of us have a choice,” Rodney said. “Will we be complicit in the federal government’s cruel persecution of our neighbors and our loved ones? Or will we stand up for our values of equality, dignity and community?”

The State Senate has already passed SB 54, and it now goes to the Assembly. The bill instructs local police not to notify Immigration and Customs Enforcement when they’re about to release people who are undocumented, except for those convicted of serious, violent felonies.

President Donald Trump has threatened to pull federal funding from cities that limit cooperation with Immigration and Customs Enforcement agents, but hasn’t addressed this bill specifically.

Rodney said those at the rally support several other state-level immigration proposals as well.

“It also includes the Dignity Not Detention Act, to improve the treatment of immigrants in detention centers, and ending the practice of detaining immigrants for profit,” he said. “And the Investing in Immigrant Families budget package will protect services and bolster due process for folks who are vulnerable.”

Dozens of immigrants’ rights groups from across the state are expected to take part. The rally starts at 9:30 a.m., followed by more than 70 visits with legislators.